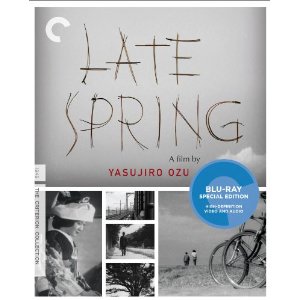 It is through repetition that a larger understanding of a single theme can be properly examined with increased understanding and nuance. At least this is the belief system which is a constant throughout the artistic history of , from poetry to painting, stage to screen. When considering the family portraits which dominate the filmography of cinema master Yasujiro Ozu, one cannot help but compare him to the traditions held constant within his country. Using the shomin-geki (“modern family drama) and restrained and understated filmmaking, Ozu has remained one of the most recognizable names in Japanese cinema for the last 60-some years.
Considering the fact that many themes and structures are revisited within an Ozu film, it is a wonder that one stands out among the rest. Perhaps it is because of historical significance, or maybe it was simply made at the pinnacle of his creative career. Whatever the reason, it is Late Spring which seems to stand tallest in the filmography of the late great Japanese master. There is a certain amount of peaceful wisdom and self repair with Ozu’s third film outing after the close of World War II. It is the fact that he had already visited the shomin-geki prior to the war which allows us to understand the changes which had occurred in the post-war world, however subtle they may be within the simplistic stylistic choices.
It is the simplicity itself which makes Ozu such a lasting figure in cinematic history. His ability to use uneventful moments to give way to a deeper understanding of their character is unbelievable. Many directors can get their story across effectively with excess, but only the truly talented can do it through the non-moments which fill the storyline of Late Spring. A widowed father, Shukichi Somiya (Chishu Ryu) worries about his only daughter’s future. He knows that if his daughter, Noriko (Setsuko Hara) does not marry soon, she will becomes older and once he is gone will have no one to take care of her. Though she now dedicates her time to taking care of him, he is determined to remedy this with upcoming nuptials.
There are no long dramatic and emotional speeches. Everything is said and seen in simple subtle statements and reactions. Many ignorant modern audience members might call this film dull, but it is simply a film which requires attention and thought. Each time I watch it, I find myself understanding the characters more and appreciating Ozu exponentially. The Blu-ray release is well-worthwhile, as the cinematography is also as excellently simplistic. Ozu is completely unpretentious in his filmmaking, and the high definition digital restoration with an uncompressed monaural is well worth having. The special features include an optional commentary track with Richard Peña, program director of ’s Film Society of Lincoln Center. Also included is a feature-length documentary by Wim Wenders about Ozu; Tokyo-ga (1985). The booklet insert has essays by critic Michael Atkinson, Japanese-film historian Donald Richie and an excerpt from Ozu on screenwriter Kogo Noda.