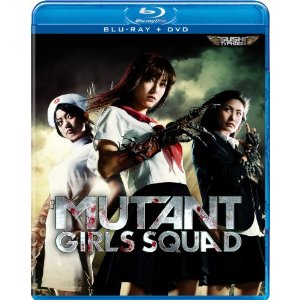 Sushi Typhoon is back with another patently vulgar and graphic horror action film, with all of the predictable over-the-top violence and blatant vulgar sexual innuendo that we have come to know them for. This time we have a kind of demented teenage boy’s fantasy of a highly sexualized and violent female X-Men, otherwise known as the Mutant Girls Squad.
After a typical gory intro sequence we are brought into the revelation that mutants have existed under the radar in for as long as humanity has been there. Their powers don’t manifest until their sixteenth birthday, so Rin must suddenly come to terms with the fact that she has a mutant arm which is a sharp and destructive claw. After watching her parents brutally murdered by the government insurgents who are aware of the mutants, Rin escapes and finds a group of mutants out for revenge against the Prime Minister.
It is never explained why there are only girls in this mutant squad. There are male mutants elsewhere, including Rin’s father. So why is it, beyond the obvious male fantasy, that there are only young teen girls in this group? They each have unique qualities and natural weapons, some of which are more sexualized than others. One girl has sword blades emerging from her breasts while another has a chainsaw which appears from her rectal area. It is sophomoric at best, but still manages to be one of the stronger Sushi Typhoon endeavors.
The Blu-ray includes an opening day featurette, as well as a behind-the-scenes making-of featurette and interviews with cast and crew. There is also a spin-off short film.