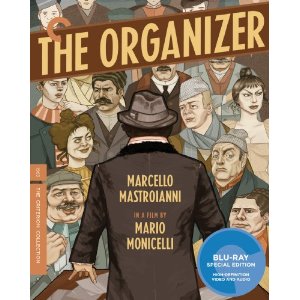 There is far less judgment within Mario Monicelli’s The Organizer than there are ideas. Monicelli does not offer a transparent presentation of preconceived notions about labor unions in , but instead shows a fairly even presentation of a single conflict between poor factory workers and their business-minded bosses. Despite a political background that began with an upbringing by his political journalist father, filmmaker Monicelli allows the story to permeate ideas in the audience’s head rather than forcing Marxist propaganda down their throat. In some ways, the protestors are seen to be equally goal oriented and cold-hearted in achieving their goals as the greedy factory owners refusing better conditions.
Though the subject matter is serious, at times even deadly, The Organizer allows a sense of humor to drift in the story. The ignorance of the factory workers attempting to organize a strike is often comical, and even the educated leader often carries more resemblance Charlie Chaplin’s tramp than a revolutionary leader. Only arriving after we have seen several sequences of the factory worker’s incompetence, Professor Sinigaglia (Marcello Mastroianni) appears unexpectedly to help the cause. Wanted by police elsewhere, the professor quickly becomes a rebel asset that the factory owners realize they must fear. Even more dangerous is the weak will of the workers, who are uncomfortable with the amount of sacrifice that they discover must be necessary in order to cause change to occur.
Released in 1963, The Organizer is more of a look back at the struggles which came with achieving some rights for the modern workers than it is a realistic presentation of present conditions. This is not to say that the film had no relevance in the early 1960s, but rather that it was a reminder of the beginnings which made modern struggles possible. Beyond the message, however, is a remarkably entertaining film, even at an even-paced 130 minutes. We are slowly immersed into this world along with the outsider, allowed to discover unique qualities and personality traits within each character.
The Blu-ray release includes a new high-definition digital restoration, with an uncompressed monaural soundtrack and an introduction to the film by director Monicelli from 2006. There are also improved English subtitles and a booklet insert with an incredibly dry and factual essay by film critic J. Hoberman.