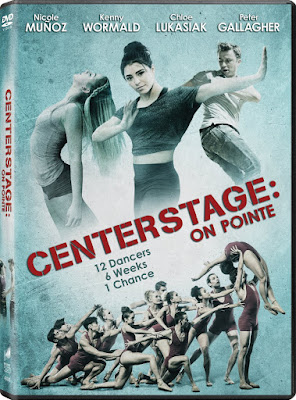 Although the Center Stage franchise has kept some of the same characters around in the roles of the teachers, the main connection in this film ties the narrative to the previous sequel far more than the original film. Continuing the storyline of dancers at the prestigious American Ballet Academy, this time we follow the path of Bella Parker (Nicole Muñoz), younger sister to the last sequel’s protagonist. Bella joins the program with the decision by Jonathan Reeves (Peter Gallagher) to integrate modern dance into the curriculum.

Before she can be accepted, Bella must compete at a training camp alongside a group of traditional ballet dancers and other untraditional applicants. The new group of hopeful recruits is taught by the characters from the first film returning as choreographers. This includes Charlie (Sascha Radetsky), Cooper (Ethan Stiefel), and Tommy (Kenny Wormald), who each get their chance for brief dance sequences.

Center Stage: On Pointe is a fairly inoffensive entry into one of the blander dance franchises. It is also one of the more positive franchises, focusing on hard work and humble attitudes while keeping the film’s romantic narratives tame enough to keep the tradition of a PG-rating. These are films for dance lovers more than movie fans, and the special features on the DVD make this clear with a dance tutorial from Chloe Lukasiak, best known for her reality TV stint on “Dance Moms.”