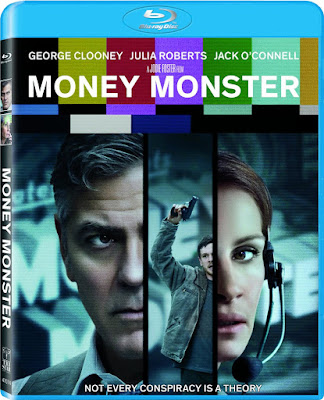 George Clooney stars as an over-the-top TV personality, Lee Gates, who hosts a show giving financial advice about the stock market. The film takes place in real time during the final evening Lee is broadcasting a show with his longtime producer, Patty (Julia Roberts). This also happens to be the night that a young man named Kyle (Jack O’Connell) decides to hijack the taping, holding Lee hostage on live television. Kyle lost his savings taking bad financial advice from the show, and wants all responsible to be held accountable for the world to see, including the CEO (Dominic West) of the company he invested in.

The basic set-up had me believing that the focus of the narrative would be on the social injustices carried out against the working class, but instead it quickly becomes a routine hostage suspense film. Watching this cast work together is never boring, but the relevance of the story is dismissed for easy villains to blame and a situation that removes itself from reality for a neat resolution. Money Monster is polished and entirely watchable, while never raising the pulses or questions that it should. At the very least, this offered adults something to watch in theaters this summer that didn’t have to do with comic books or require 3D glasses to fully appreciate.

The Blu-ray release comes with a Digital HD copy of the film, though no DVD. The extras on the disc include a few featurettes, some deleted scenes, and a music video. The best of the featurettes is an “Analysis of a Scene,” though there is also one that focuses on the star power of George Clooney.