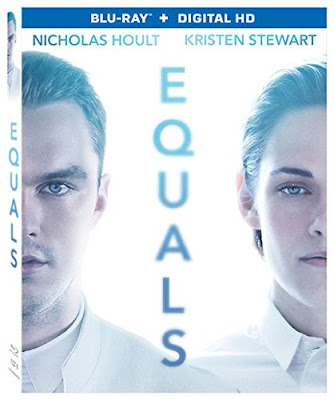 The familiar futuristic dystopian society is one with humans that have become separated from their emotions, drugged from birth to repress them. Some have anomalies which create a resistance and begin having human emotions again, but they are detained by the government. This is the setting for a romance between two characters, despite love being strictly prohibited. Silas (Nicholas Hoult) and Nia (Kristen Stewart) are employees in a facility that creates endless maps from precise analytical descriptions of locations outside of the society. Apparently the maps must be created this way because of a lack of recording devices, though the reason for this is left unexplained.

This is where the world that Doremus has created becomes a bit muddled. For a society that values cold and analytical communications, it is somewhat baffling how pervasive human interaction is shown to be in the work environment. Email and text messaging has been replaced by face-to-face conversations and group meetings, despite the obvious technological advances in the society. By the way, why is it that all futuristic societies have public broadcasts on large televisions around the city? We are meant to ignore the inconsistencies and focus on the romance between the film’s two attractive young leads, but their chemistry is hardly any more convincing.

The film is beautifully shot and given an emotive score, but it is often sluggish and monotonous. Fans of Hoult and Stewart may enjoy the performances, which are admittedly good considered how little they are given to work with. It seems like Doremus was after the teens who have just recently matured past their Hunger Games obsession, but preferably ones who didn’t pay attention enough in school to recognize how much the filmmaker has stolen from “Romeo and Juliet” in his climactic ending. Ignorance is bliss with this movie, and Equals is only likely to be fully appreciated by those who are unaware of the unoriginality and unconcerned with the gaps in logic.

The high definition presentation of the Blu-ray disc shows off the highly polished dream-like cinematography and the immaculately sparse production design. Special features on the disc are highlighted by a commentary track with Doremus, joined by cinematographer John Guleserian and editor Jonathan Alberts. Also included are three fairly generic featurettes, and the Blu-ray package comes with a Digital HD copy of the film.