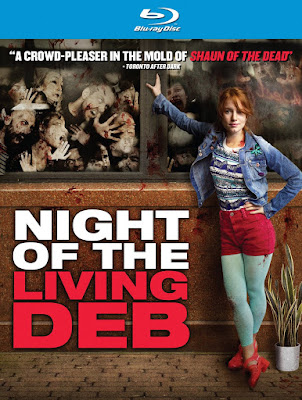 Your patience with Night of the Living Deb is entirely dependant upon the ability to endure the endless quirky dialogue, most of which is spearheaded by the title character, Deb (Maria Thayer). Deb is awkward in every way. She dresses oddly, blurts random things out from moment to moment, and her character is treated as an annoyance and burden for much of the film. This is primarily because Deb somehow ends up with a wealthy and traditionally handsome guy on the night the zombie apocalypse spreads. As much as Ryan (Michael Cassidy) wishes that he could get away from his drunken mistake, the unlikely pair is forced to rely on each other for survival.

The interaction with zombies is understandably limited, leaving far more time to focus on the odd couple pairing of Deb and Ryan. Even less of the horror elements are present when additional human survivors are added to the narrative, including Ryan’s superficial girlfriend (Syd Wilder), his overbearing father (Ray Wise), and his vulgarly macho brother (Chris Marquette). As these characters are stuck with each other in an attempt to survive, they mostly all just act irritatingly in the name of humor. Ryan is stuck playing the straight man to a cast full of character actors trying to get as many laughs as the oversimplified plot will allow.

Night of the Living Deb is mostly inoffensively bland entertainment, limiting the blood and gore of the genre. A bit more edginess may have made the film more memorable, but then again, so would an original idea for the screenplay. The high definition of the Blu-ray offers little visual enhancement for the low budget film, though it does come with a commentary track, bloopers, and a behind-the-scenes featurette. The commentary includes Cassidy, Thayer, writer/director Kyle Rankin, co-writer Andy Selsor, and editor Tony Copilillo.