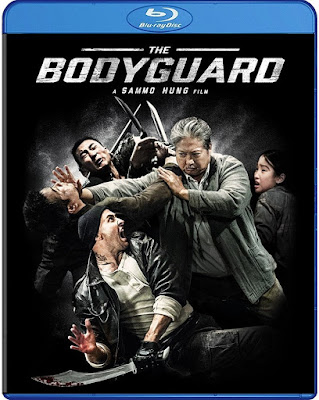 The storyline for The Bodyguard is somewhat like a Chinese senior citizen adaptation of The Man from Nowhere, with Hung in the role as retired Special Agent Ding. After the mysterious disappearance of his granddaughter while she was in his care, Ding has never quite been the same. He lives a solitary existence in a quiet village on the border between Russia and China, cut off from his family and befriended only by a young neighborhood girl (Jacqueline Chan), who clearly reminds Ding of his granddaughter. The former bodyguard is given a second chance to redeem himself when the father (Andy Lau) of the young girl has enough gambling debt to bring unsavory characters into the quiet neighborhood. Regardless of age, Ding puts his lifelong occupation to use, protecting the young girl as if she were his own granddaughter.

As if Ding’s age were not enough to make him an unlikely hero, he is also beginning to suffer from the early stages of dementia. The action in the film doesn’t really take off until the final act, leaving a great deal of time for the movie to develop the characters. There is also a fair amount of subtle humor in the first half of the movie, keeping the narrative oddly lighthearted even with the death of a major character. Some of the humor in these peaceful early scenes makes use of other iconic kung-fu actors and directors, appearing in cameos and inconsequential roles scattered through the film. The rest relies on the cutesy relationship between Ding and the young girl. Though somewhat slower than the typical martial arts movie, the stakes are also greater once the characters have been allowed to develop.

When the action finally does begin, it is relentless and bone-crushingly good. Unsurprisingly, there is some trickery needed to sell the fact that Hung is able to take down larger and younger opponents. While some of this is done by cutting to CGI x-ray shots of the bones breaking, much is developed in the cleverness of the choreography, with Ding using the momentum of the blows against the men throwing them. Hung may not be the same performer he once was, but as a director he has managed to work around his own shortcomings expertly. Some action fans may be disappointed by the slow start to the movie, but few will be let down by the final showdown sequence.

The high definition presentation of the Blu-ray is actually quite fitting for these few scenes of action, though there are just as many unflashy sequences as there are over-stylized ones. The special features only include a brief making featurette and the trailer.