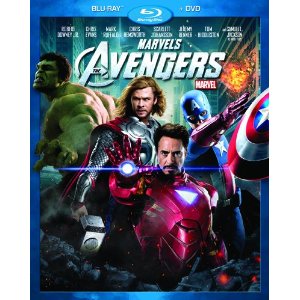 The Avengers was the film of the summer. It had everything that a summer blockbuster should have, and as an added bonus, it is actually quite good on the small screen as well. My initial concern was that the special effects which looked so good in 3D on a massive screen might be less impressive on home video, but this is a film meant to entertain in a number of ways. Aside from the special effects, which still look spectacular in high definition 2D, The Avengers also has a rather clever script with enough jokes to endure some cliché melodrama thrown in to predictably manipulate emotions.

I don’t say that The Avengers is manipulative as an insult, because most movies attempt to maneuver human emotions in one direction or another. The good ones are less transparent than The Avengers is about it, but this is also a film which was made to reach as wide of an audience as possible. This means that some of the elements are dumbed down to the point where a child can appreciate every aspect of the story as easily as his 70-year-old grandmother could. This makes for an extremely accessible and entertaining film, though one without much depth beyond superficial entertainment.

Part of the reason The Avengers only seems to scratch the surface of a plot has to do with the excess in superheroes, and the movie stars attached to them. There is Iron Man (Robert Downey Jr.), Thor (Chris Hemsworth), The Hulk (Mark Ruffalo), Captain America (Chris Evans), Black Widow (Scarlett Johansson), Hawkeye (Jeremy Renner) and Nick Fury (Samuel L. Jackson), and each of these heroes must be given proper screen time and something of a character arc. With all of that going on at the same time as jokes and spectacle, sometimes the dialogue can become slightly transparent. I am interested in seeing what they do with a sequel, though I think it is for the ego of all the stars that each character is given such specifically designated screen time.

I wouldn’t call The Avengers the best superhero ever made, but I would call it the film of the summer and it is certainly a must-see for anyone that likes the genre. Seeing it in theaters may have been ideal, but the high definition Blu-ray presentation is still remarkably impressive. The effects may even look better than they did in 3D, and it is certainly easier to see what is happening during the action sequences. The 2-disc combo pack also comes with a DVD version of the film and an onslaught of impressive extras. The DVD includes a featurette about the casting process and an audio commentary with director Joss Whedon. The Blu-ray bonus features include those and a second-screen experience for laptop or ipad owners, as well as an original short film and a featurette about the special effects. There are also deleted scenes and the first-ever gag reel for a Marvel comic book film.