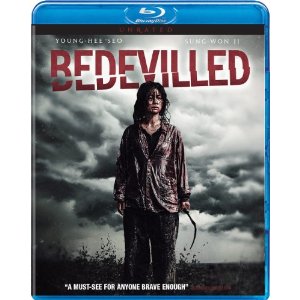 Violence against women abounds in Bedevilled, the latest painful revenge film from . Brutality against women must be endured for a large portion of the running time before the victim finally enacts her own unyielding form of vengeance. This is not an easy film to watch, aligning to the tradition of revenge films from the last ten years in Korean cinema. This is a character driven horror/thriller, though not one in which any of the characters are particularly likeable.

Hae-won (Seong-won Ji) is living the city life, despite having grown up on a remote island. After seeing a woman attacked by a group of thugs, Hae-won refuses to testify against them. This cold behavior suggests some unsettling anxiety deeper inside of her, and a series of outbursts at work cause her to take a forced vacation. With childhood friend Kim Bok-nam (Yeong-hie Seo) begging for her to return to her childhood home, Hae-won takes vacation to that she will never forget.

Abused by both the men and elderly women alike, Kim’s life is a constant hell on , though her friend Hae-won does little to help her in this misfortune. With a daughter to look after and no other possibility of escape, Kim looks to her city friend for a chance to escape this brutal existence. When left with no options and after a tragedy takes away any restraint, Kim takes out her revenge on those who have wronged her and those who stood by and watched her wronged.

The Blu-ray release includes a behind-the-scenes featurette as well as a trailer. The film itself is not spectacularly visual, though the high definition shows a marked improvement from the DVD. This is a slow burning film which is about the human decisions when faced with violence, not an action film or one exploiting elements of gore.