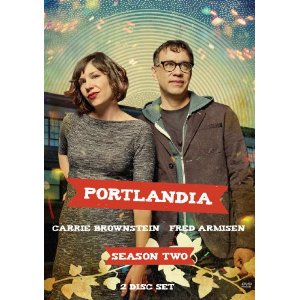 There have been a lot of sketch shows over the years, and “Portlandia” follows in that tradition. There are the usual absurd and random caricatures and skits, though this show is so specific in its choice of location and subsequent topics that it may make the humor less accessible than desirable. That being said, for anyone who has spent time in , the humor of this show can often be spot on. And as an additional bonus, there is an episode which takes the time to poke fun at as well.

There are some great gags within this series, and every once and awhile I even found myself laughing. The problem with these jokes is that they are often used again and again in repeat episodes, just like any skit show does with a routine that works. Before long, the joke that was once funny becomes overwhelmingly tiresome and repetitious. This happens more often in season two, if only because this season has a great deal more episodes than the first one. There are still some great moments, but they are fewer and further between in this season.