How I Met Your Mother: The Complete Season 7 Blu-ray review 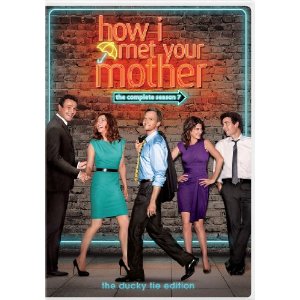 Multi-camera sitcoms shot on a stage with a live audience and a laugh track seemed all but dead, but there are still a few gems among the reality television and single camera laugh-track void shows. “How I Met Your Mother” may use all of the traditional technical elements of these sitcoms, but there is an added element; narration. The entire show is told through the context of a father telling his son and daughter about the journey from being single to meeting their mother, only even the audience isn’t clued in to who their mother is. The show begins with a misleading pilot that introduces an attractive female lead who has the same sense of humor as our narrator in his younger years, but by the end we are informed that she isn’t “the one”.

There are plenty of women who aren’t the one our narrator Ted will marry, but that is the charm of How I Met Your Mother. The premise seems fit for an average romantic feature film, but by dragging it out in a series there are many great opportunities to examine dating in 2005. The portion of the show that has Ted telling his children about their mother, takes place in 2029, which allows us to focus on the relevance of the 2005 dating scene. Just as Friends is now a window into the 1990’s and how relationships were approached and discussed among friends, How I Met Your Mother has the same charms for a new age of dating. The situations that Ted finds himself in are likely to parallel many experiences that frustrated singles feel today, and it is done in a humorous and often thoughtful way. This seems to be a direct result of a great cast and good writers.

The role of Ted seems written for Jimmy Fallon, but Josh Radnor is an acceptable substitute and the fact that he looks like John Cusack before he lost the baby fat on his cheeks helps him seem likeably familiar. I wasn’t sure how I felt about him during the first couple of episodes, but he certainly makes for a better romantic lead than Ross ever was, and you find that he grows on you as the season progresses. Radnor is supported by Jason Segel, who was great on Freaks and Geeks and seems to be playing a variation of the same role here, and Alyson Hannigan from the American Pie series. Neil Patrick Harris is also added to the cast as the womanizing friend who always wears a suit. Bob Saget as the never seen elder version of Ted, and voiceover for many parts of the show, making How I Met Your Mother feel like the creators of Wonder Years was asked to make a Friends replacement, especially when Wendy Cooper shows up. But it works in a good way.

As for the writing, it’s creatively sweet without losing its hip edge. There is also an element of geekiness in the scripts, which seems to be in these days. Season seven has become a bit of a stretch and it seems we may never know who the mother is, but that doesn’t mean that there aren’t still moments of genius. This season is called “The Ducky Tie Edition,” for the duck tie that Barney is forced to wear for a year when he loses a bet to . There are also some more slaps and Ted goes through his usual roller coaster ride in various relationships.

The DVD includes a featurette about Neil Patrick Harris getting a star on Hollywood Bld., as well as a featurette about the plethora of guest star cameos this season. There are also two making-of featurettes and select episode audio commentaries, but most fans will find more laughs in the deleted scenes and gag reel.