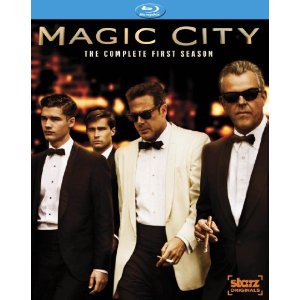 After the success of Mad Men, it is no surprise that we are suddenly seeing a whole lot more period television series, such as the unsuccessful “Pan Am,” “Boardwalk Empire,” and now “Magic City.” This series takes place at the Miramar Playa Hotel in in 1959, making it feel like a cross between “Boardwalk Empire” and “Mad Men,” especially when criminal activity is what helps to keep the hotel alive during Castro’s occupation of . Between the mob, the Kennedys and the CIA, owner of the hotel Ike Evans (Jeffrey Dean Morgan) is forced to jump through a series of hoops to stay afloat.

When Ike becomes involved with Ben “The Butcher” Diamond in order to keep the unions away from his hotel, he changes the direction of his business for both him and his sons. The changes are small at first, but soon they are tangled up with a man whose name is a direct result of his vicious nature. Matters are made even worse when one of Ike’s sons begins an affair with the young and beautiful wife of “The Butcher,” leaving us to imagine what would happen should he get caught.

What makes “” a joy to watch is similar to what makes “Mad Men” work as well, on top of excellent acting and impeccable writing. “” uses the real-life events of the time and location and blends them into the storyline. The pilot episode of “” has a Frank Sinatra show on New Year’s Eve, and details such as Sinatra’s insistence that every seat be filled are part of what makes this show a slice of history as well as entertainment.

The first season of this Starz Studios Original series is included on three discs in this set. There are eight episodes in this first season, each nearly an hour long and filled with the kind of sex and violence which can only be found on cable channels. The special features include a making-of featurette, as well as one about the style, music and cars of the show’s time period. There is even a featurette on the real that inspired the show.