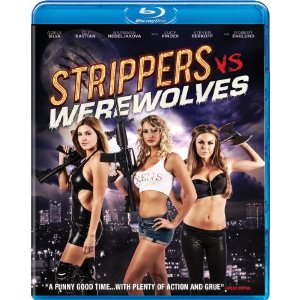 The effects are bad but breasts are bare, so I don’t see how I will be able to change anybody’s mind about this film. It is as cheesy as you would expect, perhaps even more so. It makes Zombie Strippers look like a masterpiece of good taste, but that is not because Strippers Vs Werewolves is any more vulgar. It is simply less intelligent, reaching to base audience members who don’t care to suspend disbelief as much as they want to see nude women. There is hardly even any horror in this B-film, even when there is violence and death. Instead of frightening, this film is just boring and predictable.

After a confusing a poorly edited opening sequence in which we watch a building blow up, we are brought back into a slightly more conventionally bad attempt at filmmaking. The characters are all introduced, although they are all indistinguishable and interchangeable. There are a group of strippers and a group of werewolves. After we are told all of their names in freeze frame titles, the idiotic story can continue. One stripper is giving a private dance to a man who gets too excited and turns into a werewolf, so the stripper instinctually stabs him in the eye with a pen, which is conveniently made of silver.

The death of one werewolf brings the wrath of the remainder of the pack, and soon the sleazy strip club The Silvadollaz is a battlefield between shotgun carrying strippers and goofy prosthetic wearing werewolves. Even a special appearance by Robert Englund isn’t enough to make this film even unintentionally good. Skip this film unless all you care about is the possibility of nudity, in which case you are the base target this shoddy film was directed towards.

The Blu-ray bonus features include a commentary from the film’s producers and a behind-the-scenes look at the making of the film. It is all just bad. And the high definition only serves as further proof in the terrible filmmaking at work in Strippers Vs Werewolves.