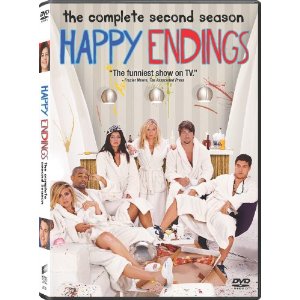 The main relationship in this series is between Dave (Zachary Kighton) and Alex (Elisha Cuthbert). The series begins on their wedding day, but when Alex leaves Dave at the alter it ends the plans of a life together that they once had. It also makes things difficult for the group of friends. The group is tied to both of the suddenly split couple, and they don’t know how to cope with the new dynamic. Alex’s sister Jane (Eliza Coupe) is married to Dave’s friend Brad (Damon Wayans Jr.). Thrown into the mix is Dave’s gay roommate, Max (Adam Pally) and the desperately single Penny (Casey Wilson).

It is clear that we will be hearing more about Dave and Alex, as they are the only ones capable of adding some romantic through line to the series. Season one didn’t advance their relationship, and season two only hints at it, but there are no other relationships on the show which are taken as seriously. Nearly every character has a relationship at one time or another, but they move on so fast from one episode to the next that it is hard to feel bad for them when heartbroken. Mostly this is a show to make you laugh at the trials of being single, or in a relationship, whereas all of the serious discussion of these things are left for another show. “Happy Endings” is all laughs and little sentimentality.