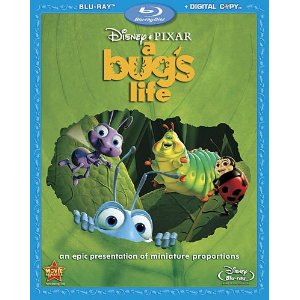 When A Bug’s Life was released on DVD it was the first to have a transfer direct from the digital source, making it a special visual treat to those who took the film home, and it makes sense that the Blu-ray release of the second film from the now legendary Pixar Studio should be given special attention. I have come to realize that there is more to be said for high definition in the presentation of animation than nearly any other genre, and this film is a beautiful example. Even though some of the animation is slightly more rustic in comparison to the recent films from the computer animation studio, there is still much that seems groundbreaking about this film today despite the ten years that have gone by since its initial theatrical release.
The film is extremely simple, though it is one that has made its way through several genres besides animation. Whether comedy (The Three Amigos), western (The Magnificent Seven) or Samurai film (The Seven Samurai), there is no questioning the influence of this film, but it isn’t nearly as much about the story as it is the imaginative retelling and the visual spectacle that comes with it. The previous Pixar film, Toy Story, had spent much of the film indoors, but A Bug’s Life takes full advantage of the surroundings of nature.
The scenery is spectacularly animated, which makes the animated bugs seem somewhat cartoonish by comparison. The representation of nature looks so real that it is hard to reconcile that the characters exist in the same film, which is only enhanced by the revealing high definition presentation. This is more of a compliment to the realistic presentation of everything from sunshine to raindrops, leaves to grass, than it is a criticism of the characters.
All-new to the Blu-ray release are a couple of Blu-ray exclusive features, though the previous special features were not left off of the release. The particular feature which is spectacular in high definition is the short film, ‘Geri’s Game’, which was shown before the film in North American theaters. There is also the director’s original commentary track and a new introduction to the film. There is also a classic Silly Symphonies short that is included because it is about grasshoppers and ants. The new features include a featurette which brings the filmmakers to a round-table to discuss the film ten years later. There is also a fantastic never-before seen presentation of the original script idea for the film. There are drawings and simple animation sequences to give audiences an idea of what was originally conceived and how things changed.
Starring: Kevin Spacey, Dave Foley, Julia Louis-Dreyfus, Hayden Panettiere, Phyllis Diller
Directors: Andrew Stanton, John Lasseter
Aspect Ratio: 2.35:1
Rated: G (General Audience)
Studio: Walt Disney Studios Home Entertainment
Release Date: May 19, 2009
Run Time: 95 minutes