World on a Wire Blu-ray Review 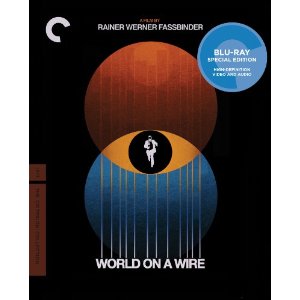 The only science fiction movie that German filmmaker Rainer Werner Fassbinder ever made was this long-lost three-and-a-half hour long film made for German Television. It has traces of “The Prisoner” to it, along with influences of Stanley Kubrick, Kurt Vonnegut and Philip K. Dick. The satirical look at the futuristic world of computer technology was incredibly ahead of its time in 1973, and is a recently rediscovered gem for film fans to now experience on high definition Blu-ray.
The film’s storyline is simple, and even familiar in the sense that these themes have been touched upon by countless filmmakers from David Cronenberg to Steven Spielberg ever since. Fred Stiller (Klaus Löwitsch) is a cybernetics engineer who is responsible for the creation of a complex computer world of virtual reality cities and people. It is like , but the cybernetic people aren’t aware that the life they are living isn’t actually reality, but virtual reality which can be visited though a machine.
When one of Stiller’s co-workers dies suddenly, there are suspicions of foul play. As he investigates this mishap, a deeper corporate conspiracy is discovered, and Stiller begins to doubt his own existence and reality. There are hints that he may actually be living in one of the computer worlds himself, unable to trust the world around him. The labyrinth of computer worlds makes it impossible to know what—if anything—is reality. We follow Stiller on a mad escape from authorities who may very well be programmed to find and destroy him, as well as nearly every other citizen. As the most wanted man in his world, there seem to be higher powers preventing Stiller from finding the truth.
The Blu-ray edition of World on a Wire provides the entire 3 ½ hour two-part TV film on one disc, along with plenty of additional special features. The film has been newly restored, with a digital transfer supervised by cinematographer Michael Ballhaus. There is also a fifty-minute documentary on the making of the film, called “Fassbinder’s World on a Wire: Looking Ahead to Today, by filmmaker Juliane Lorenz. Also included is a new interview with German-film scholar Gerd Gemünden and a booklet insert with an essay by film critic Ed Halter.

Email ThisBlogThis!Share to TwitterShare to FacebookShare to Pinterest
tags World on a Wire