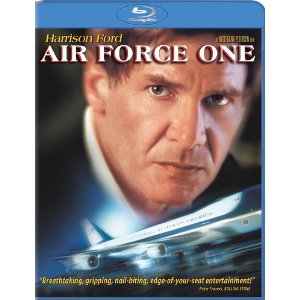 While some of the special effects in Air Force One may have seemed amazing at the time, they now simply appear archaic and uncomfortably unrealistic in the days of high definition clarity. When the film was initially released in theaters at the end of the 90s I remember thinking that the digital plane crash in the film was a cheap and shoddy climax for the film, void of any real life or realism. Seeing the film in the high definition presentation of Blu-ray only reconfirms this feeling, now knowing that it is possible for CGI to appear somewhat believable. Fortunately there is enough reliance on the old-fashioned filmmaking to ensure Air Force One is not entirely outdated, though the use of a heroic and selfless president may seem a little unbelievable to a country that just had George W. Bush as president for eight years.
Although the protagonist president bears little resemblance to what most would consider reality, there are themes of terrorism that seem too familiar after 9/11. It is now difficult to watch a film about a terrorist hijacked plane with the same Blockbuster escapism that the film was meant to carry initially, though the film is simply meant to entertain. There is little political or social significance in the film, which is much more interested in making Die Hard with a president than any relevant statement about terrorism.
Harrison Ford plays the idealistically honest President of the , James Marshall. is the kind of president that always travels with his family. This unrealistic and idealistic vision of the president seemed to dominate the 90s, including films like American President, Dave and Independence Day. When Air Force One is hijacked by a group of militant Russian (or ) terrorists (led by Gary Oldman), chooses to stay with the plane rather than bailing out. He insists on protecting his wife and daughter, refusing to leave other people behind for safety. This was the last big success that Harrison Ford actually had, making a string of failures ever since.
The Blu-ray disc only includes a commentary track by director Wolfgang Petersen, previously released on the DVD.