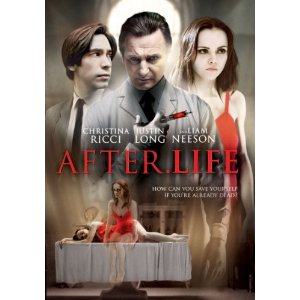 The premise of After Life (I refuse to call this film After.Life, because I have no idea what the point of the period is) is rather compelling. In fact, it seems like the kind of scenario which would work perfectly as a short film. As a feature film, it is nothing but frustrating. At first I was convinced that the film was compelling simply because it kept me guessing about the end.
I knew that the film was going in one of two directions; ghost story or serial killer. As long as I didn’t know what type of film it was, I couldn’t predict where it was going. Here is the problem: the distinction is never made. Rather than make a decision, this film backs itself into a corner which makes either implausible, giving no final conclusion either way. It is one thing to allow the audience to decide, but only when the clues are there. After Life attempts to have it both ways, failing miserably.
After a contrived argument with her boyfriend, Anna (Christina Ricci) rushes away from a date only to get in a car accident. When she awakens, Anna is in a funeral home run by Eliot Deacon (Liam Neeson). Deacon claims that Anna is dead, and that he has a special ability to talk to the dead. Meanwhile Anna’s boyfriend, Paul (Justin Long), becomes convinced that she isn’t really dead. At the same time the audience never knows whether or not she is dead, but the film frustratingly goes nowhere.
After the premise is set up, Deacon takes an overly long time preparing Anna. Ricci spends half of the movie nude, for no notable reason other than to keep the audience’s attention off of the fact that nothing happens. Other scenes are of an overacting Long attempting a one-man show of grief, in all stages. Although After Life is certainly unique in some ways, which does not necessarily make it a film of any worth. As captivated as I was at the premise, by the end I was angered by the outcome.