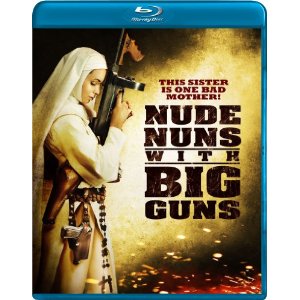 
Nude Nuns With Big Guns is more than an homage to Robert Rodriguez; in many ways it feels closer to plagiarism. With a storyline that occasionally has blow-by-blow similarities to El Mariachi and/or Desperado, and a style mimicking Machete, I found even five minutes of this hard to watch without the urge of simply putting a better film on. It is a second-hand collection of better movies, only held together by a weakly constructed selling point which began as a short film. It has the appeal of lesbianism violence, both perpetrated by a nun.
The short film doesn’t feel the need to go into much detail about the sinful nun, but you would think that there might have been a better storyline thought up when creating a feature film. Instead we are just dropped into a world where the church is more of an organized crime syndicate than an institution for God. The priests are pimps and drug-dealers, with the convent nuns used as mules. When a drug deal goes wrong and Sister Sarah (Asun Ortega) is left for dead, she heals with dedication to revenge alone.
Built to resemble exploitation films of the 70s, Nude Nuns with Big Guns spends far more time imitating Rodriguez. To the point where weapons are even hidden in a similar manner to those in the guitar case of El Mariachi. There is plenty of senseless violence in this film, along with a plethora of nude nuns and a few lesbian love scenes. It is all indulgent male fantasy fit within the most macho of genres. It also happens to be quite dull, despite the mass quantity of flesh and blood. The acting alone makes the film near unbearable.
The bonus features on the Blu-ray include the original short film, as well as a theatrical trailer. The acting is even worse in the short film, but it is a relevant inclusion. What isn’t surprising is the lack of any other features, and the unimpressive quality of the film in high definition.