War of the Arrows Blu-ray review 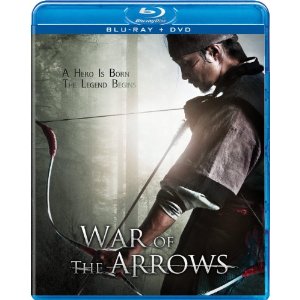 It is a testament to the rising success of South Korean cinema’s national success when every year or so the record for highest grossing film is exceeded. War of the Arrows is the highest grossing epic in Korean cinema history, though there is bound to be one in the near future which will even surpass this spectacle. What makes Korean cinema so successful is not only the effectiveness in the filmmaking, but the heart behind each of the films. War of the Arrows is no exception, with as much moving melodrama as there is exciting action.
The film takes place in the early 1600s, staring at the rule of King Gwanghaegun. In the opening sequence of War of the Arrows, General Choi Pyong-ryang is framed for treason and executed, despite being a loyal archer for the king. Unable to save himself, the general is at least able to protect his children and provide the opportunity for their escape. They are raised in secret by a family friend for thirteen years, until the second Manchu invasion of .
Nam-yi and his sister Ja-in have moved on with their lives, until the wedding day of Ja-in when the Qing troops attack. Led by Commander Jiusinta, the Qing troops take many prisoners, including -yi sets out on a personal mission to rescue his sister, taking on an army troop on his own. The abilities with an arrow he learned from his father become useful and necessary.
The action remains mostly tied to the use of a bow and arrow, though there are many varieties. This is a strong point of the film, and the special effects with the use of arrows are also effective. CGI must be predominately relied upon, but it looks so spectacular in the high definition presentation of Blu-ray that the storyline can easily remain believable. There are no jarringly bad moments to bring us out of the movie-watching experience, which is the biggest concern with bad special effects.
The Blu-ray also includes a behind-the-scenes featurette and highlights within the special features. Trailers are also included. These are minimal additions, though I appreciate that both a DVD and Blu-ray version of the film are included in the two-disc set.
Starring: Hae-il Park, Seung-yong Ryoo, Moon Chae-Won
Director: Han-min Kim
Language: Korean
Aspect Ratio: 1.33:1
Rated: R
Studio: Well Go USA
Release Date: February 21, 2012
Run Time: 122 minutes