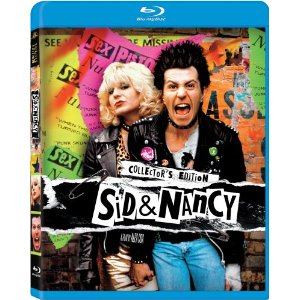 Starring: David Hayman, Gary Oldman, Andrew Schofield
Director: Alex Cox
Rated: R
Studio: MGM (Video & DVD)
DVD Release Date: December 27, 2011
Run Time: 113 minutes
Sid & Nancy is a love story unlike any other, full of abuse which is mostly self-inflicted and addictions which rule the relationship. While Sid & Nancy is about the gravitational pull Sex Pistols bassist Sid Vicious (Gary Oldman) had with groupie and junkie girlfriend Nancy Spungen (Chloe Webb), it is also about the damage that it caused the iconic punk band from the1970s.
This untraditional biography tracks the rise in success for the Sex Pistols, though the focus is clearly on the rise and fall of Sid and ’s relationship. From fun beginnings being seduced by a fan to a life dependant on a heroin addiction which ends in the infamous Hotel Chelsea in , Sid and Nancy’s relationship is far more eventful than the history of the Sex Pistols. This isn’t to say that Sid & Nancy is without music, and Oldman proves able to spit at the audience like the best of them, but the focus remains on the more volatile lifestyle off-stage.
The Blu-ray release Collector’s Edition release of this 1986 classic features a sharp high definition presentation that allows clarity never before seen for home entertainment. The music sequences all blare out in 5.1 DTS-HD Master Audio. There are a few special features, including two featurettes and a theatrical trailer, but these have all been previously released on DVD.