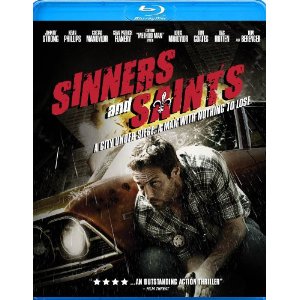 Sinners and Saints is another cop action film set in crime-riddled , though this one turns into a military conspiracy action film set in the heart of the hurricane ravished city. The plot is then increased to a much more unbelievable level of action, feeling more like a film born from the heydays of 80s action. There may not be much reasoning behind the large public shootouts, but they are damn fun.
Supporting player Johnny Strong takes the lead in this shoot ‘em up film as New Orleans Police Detective Sean Riley. He may be rough and bend the rules a bit, but Johnny gets the job done. When he stumbles on a military conspiracy underneath a series of murders, Johnny takes on a group of highly trained mercenaries with only an inexperienced field agent alongside him. Between hired killers and the street’s own local gangs, there are many obstacles standing in the way of the justice.
The Blu-ray release of this high-octane action film has the best parts in clearest focus. The action is what Sinners and Saints is all about, and the high definition enhances this part of the experience. It can do nothing for the cheesy dialogue and more than occasionally moments of bad acting, but a certain degree of this is expected with an action film. The special features include a behind-the-scenes featurette, as well as deleted scenes.