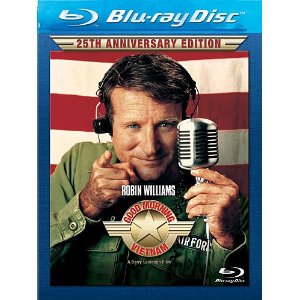 
If any filmmaker can lighten the Vietnam War into a comedy, it is Barry Levinson, and if any actor was capable of the fast-talking military deejay it was Robin Williams. Williams won a Golden Globe for his performance and it increased his popularity in a whole new field of roles. This would next include his performance in Dead Poet’s Society, also on Blu-ray this week. The 25th Anniversary Edition Blu-ray release of Good Morning, features all the bells and whistles of high definition, not to mention a film which is worth owning in the best quality.
Williams stars as deejay Adrian Cronauer, a man who entertains the American troupes in with the latest hits of the 1960s and his own unique style of comedy. This routine is extremely popular with the soldiers, and not as much with the superior officers. Cronauer hardly even seems attached to the war until he is caught in moments of violence from bombs placed in cafes and restaurants frequented by soldiers.
There are some heavier moments within Good Morning, , but the highlight of the film is the time spent on-air. It is the radio monologues which fuel the humor and the heart of the film, taking away a bit more than just the senseless violence which most films display front-and-center.
The Blu-ray special features include a six-part production diary which takes one the film’s production from its conception to a year after filming wrapped.  The highlight of the special features, however, is the inclusion of raw material from the radio program monologues. There are also two trailers.