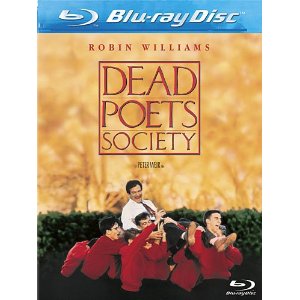 Before Peter Weir gave Jim Carrey a chance to break out of the rubber-man routine he had become known for on “In Living Color” and the Ace Ventura franchise and into more dramatic roles following The Truman Show, he took a similar chance on Robin Williams. At the time, Williams was best known for comedy. In fact, he was essentially only known for comedy, which made him an unexpected choice for a key role in the extremely dramatic Dead Poet’s Society.
Taking place in the rigid environment of a private boy’s school, , Dead Poet’s Society follows the changes which are inspired in the students with the arrival of an untraditional English professor named John Keating (Williams). His unconventional methods light a fire in the students, inspiring them to start a secret poetry club and take chances that they may never otherwise have had the courage for. With the motto “Carpe Diem,” and the promise of youth, this group of friends is given the opportunity to grow and the responsibility of hard decisions.
The Blu-ray release of this depressing and inspirational classic features a high definition presentation like never before seen. The film itself has never looked better for home entertainment, and it comes packed with an assortment of special features as well. There is a retrospective featurette as well as some footage of raw takes from the filming. There is also a great featurette on the film’s cinematography, as well as one on the film’s sound with interviews by Weir and director David Lynch. Also included is a commentary track with Weir, Academy-Award-winning screenwriter Tom Schulman and cinematographer John Seale.
Starring: Robin Williams, Ethan Hawke, Josh Charles, Robert Sean Leonard, Gale Hansen
Rated: PG
Studio: Touchstone / Disney
DVD Release Date: January 17, 2012
Run Time: 129 minutes

Oh man, sounds like I need to check out the blue-ray as I do love this film so. Williams was an interesting choice agreed. The ability of this film to be both "depressing and inspirational" as you say is what I think makes it amazing.