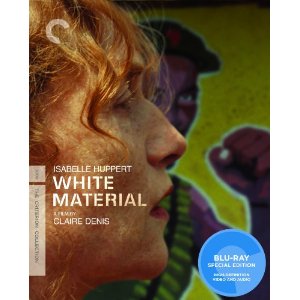 There is a ferocious intensity to each of the actions within White Material, even when nothing at all happens. Death is inevitable, as we are shown the demise of significant characters from the opening sequences, before jumping back in time. We know things will end badly in this film, and yet it is the time before it happens which is most harrowing. The characters are infuriatingly flawed, and we as an audience are forced to watch the events as they must unfold.
Isabelle Huppert stars as French colonist Maria Vial, a woman who has raised a family in an unnamed African country with a questionably successful coffee bean plantation when suddenly civil war threatens to push them out. Although they are in an area inhabited by an army of rebel children, they are not much protection and hardly treat the foreigner with any welcome. Maria is taxed just to drive on the road near her house and her son Manuel (Nicolas Duvauchelle) is accosted by them. This is all despite the fact that their leader, known as The Boxer (Isaach de Bankolé), is hiding out wounded at the Vial coffee plantation.
Somehow this information also makes it to the opposing army, and danger seem likely at every turn. Despite the pleas of other members of the family, Maria insists on staying and seeing the crop through. She wants to harvest when all of the rest of the colonials have long since fled the country. She is consistently referred to as “the white woman” in the film, and her son is accosted because of his blonde hair, which he responds alarming to. The unease of the white person in a volatile country may come some from writer/director Clair Denis’ own past, as she herself grew up as a French native.
The 2009 film was digitally transferred for this Blu-ray release, under the supervision of Denis and her cinematographer, , along with a DTS-HD Master Audio soundtrack. The special features include new interviews with Denis, Huppert and de Bankolé, a deleted scene and a short documentary done by Denis at the premiere of the film at the 2010 Ecrans Noirs Film Festival in . There is also a booklet with an essay by film writer Amy Taubin.