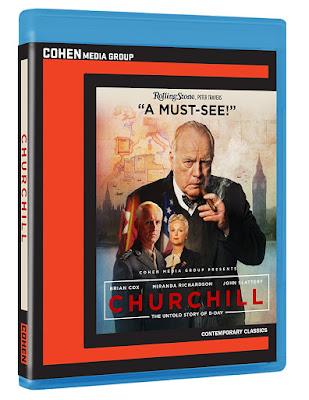 Covering the 96 hours leading up to the World War II invasion of Normandy, we never set foot on the battlefield or see more than a few glimpses of actual soldiers in Churchill. Instead, the film remains tied to those making the larger decisions, the ones who would affect thousands of soldiers as a result. Haunted by the loss of soldiers he was responsible for at Gallipoli during the First World War, Churchill is absolutely against the operation to take back France from the German occupiers. As he enters into verbal matches with American commander Dwight Eisenhower (John Slattery), Churchill begins to realize that his power of influence has diminished and that he serves as little more than a figurehead for the war efforts.

This is the central conflict of Churchill, rather than any external battles going on at the time. The British Prime Minister has reservations with Operation Overlord, but he appears far more disturbed by his marginalized role in the war efforts and the blow to his ego. It is only through the strong will of his wife (played by a scene-stealing Miranda Richardson) that Churchill is able to accept his place in the war, encouraging him to give his famous D-Day speech. There are rousing moments of patriotism near the end of the film, even if we must endure childish and petty behavior for much of the run-time.

The fact that Churchill is dialogue-heavy alone is not a problem, but it becomes overbearing as the film goes on. At first these scenes of dialogue merely highlight the good acting, but that begins to slip into melodrama as the film continues. The one-note tone of the narrative loses impact over time, because there are not enough downbeats and the emotions can’t be raised without slipping into scenery chewing. As much as the film must focus on its title role, our proximity to the iconic historical character is less revealing than it is claustrophobic. Director Jonathan Teplitzky’s decision to shoot much of the film in close up only enhances this feeling, so the anxiety we feel comes from our proximity to a man full of similar dread.

The Blu-ray release of Churchill does not have an alternative way of viewing the film, though the disc itself comes with a 22-minute making-of featurette. There is also a trailer.