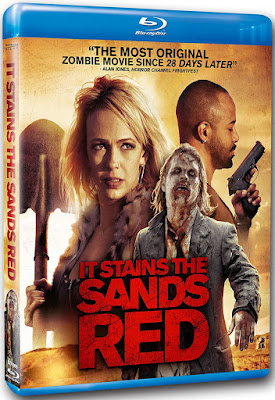 Not only very bright, but our protagonist is also annoyingly unsympathetic for much of the film, despite an eventual act of redemption in the final ten minutes. We join Molly (Brittany Allen) in a sports car with her boyfriend (Merwin Mondesir) as they are traveling to meet with friends in a small airfield. The zombie apocalypse is already underway, but Molly is more interested in getting high on drugs and drinking vodka. When Molly suddenly has to throw up from overindulgence, the car gets stuck in the sand and starts the series of poor decisions that are the only reason the premise is possible.

Before long a zombie arrives. This single zombie (played by Juan Riedinger) dispatches Molly’s boyfriend, despite his being armed with a gun, and causes Molly to flee into the desert, even though their vehicle could be unstuck with a little intelligence. Instead, Molly decides the wiser decision is to walk 35 miles to the airfield, with her pet zombie following her the entire way. The basic premise of the film claims that the trouble with Molly’s plan is the fact that the zombie doesn’t have to stop to eat or sleep, leaving her at a disadvantage, but this never plays out. Every time Molly wants a break, she simply climbs onto a rock that the zombie cannot climb, making him an entirely unthreatening character for much of the film. I understand the urge to do something new with the genre, but it somewhat defeats the purpose of a zombie movie if their behavior is altered to make them less frightening.

Even though there are other zombies later in the film that go back to being the monsters we know from the horror genre, our main zombie becomes more of a traveling companion than a villain for Molly. Not only does she refuse to kill him when she has the chance, but Molly actually begins to trust and protect the undead man after his flesh-eating ways save her from a couple of despicable criminals out on the road. This idiotic behavior is difficult to accept, especially after having been forced to listen to little other than Molly whine for a majority of the film, while her only co-star does nothing but moan.

There are a few creative alterations on the zombie narrative in It Stains the Sands Red, but just as many frustrating elements and annoyingly stupid characters to cancel out the positives. The smartest thing about the film is the way that the filmmakers were able to depict a zombie apocalypse without ever actually showing it, other than in an expositional overheads shot of Las Vegas altered by CGI. Unfortunately, any intelligence on part of the filmmakers is never transferred to the characters in the film. The Blu-ray special features include two behind-the-scenes featurettes, though only one seems to have been sincerely made. There is also a trailer.