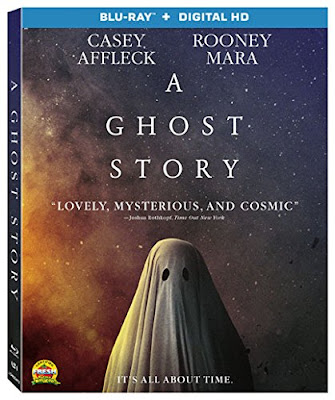 The narrative itself is more interested in ideas than exact details, which gives us fragments of information along the way instead of making it a priority. We aren’t even given the names of the characters, listed in the credits as C (Casey Affleck) and M (Rooney Mara). They are a young couple in love when we join them, living in a small house in a Texas suburb. C works in music, which seems to allow him and M to spend much of their time in the home. There are hints of a supernatural entity living with them, but the film doesn’t really pick up until after an anticlimactic death scene, suddenly removing C from the narrative in his worldly form. Instead, C returns to the home in the form of a ghost, represented by Affleck wearing a sheet over his head, watching over M as she mourns the loss of her love.

The presentation of a ghost as a man in a sheet is certainly one the ideas that makes the film feel like an over-intellectualized student film, but Lowery’s experience as a filmmaker allows him to convince us that this is more poetic that pretentious. Had this and the full-frame formatting been his only stylistic choices, the emotional depth would have properly balanced with the artistic experimentations. But where Lowery started to lose me in the first half of the film was his glacial pace, which feels more like he is testing the audience rather than properly servicing the narrative.

Some of the sequences work in real time, but too many of them are stacked on top of each other without any dialogue to ground the film or give us reason to care. Audiences will likely lose their patience when forced to watch Mara gorge on a chocolate pie for a sequence lasting at least six minutes long. As much as I found myself hating certain scenes of the film, the second half of the film redeems itself with a few emotional moments balanced within creative ideas. In the end, however, A Ghost Story is a film far more enjoyable to think about and discuss than it is to watch.

The Blu-ray release comes with a Digital HD copy, along with the special features on the disc. There are two featurettes, deleted scenes, and an audio commentary with Lowery and select crew members. The special features may actually be more interesting than the film itself, if only because they say things about the film which are left purposefully ambiguous in the viewing experience. It helped me to appreciate the film more, even if I couldn’t have enjoyed it much less.