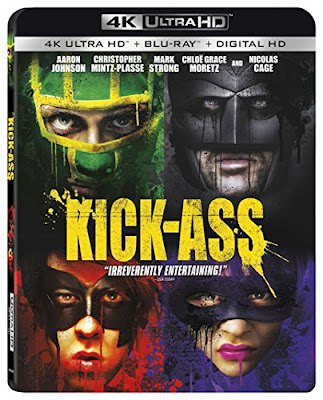 Dave Lizewski (Aaron Johnson) is tired of being the geeky kid at school, so he makes the decision to become a masked crime fighter, despite having no special skills or training. After buying a costume online, he turns himself into a superhero named Kick-Ass and becomes a viral sensation by fighting a group of low-level criminals trying to break into a car. This encounter ends horrifically, but it also gives him his abilities when the beating he takes leaves Dave with no pain. Suddenly able to take a large number of hits without being affected by it, Kick-Ass still doesn’t have the skills but does have an innate ability to win fights through mere perseverance, which makes him a viral sensation.

Even with this unique situation providing Dave/Kick-Ass with an upper hand in a fight, he isn’t really the real superhero of the film, even if it is titled after him. During his crime fighting, Dave discovers a father/daughter crime fighting team with actual abilities. Former police officer Damon MacReady (Nicolas Cage) has trained his 11-year-old daughter, Mindy (Chloë Grace Moretz), to be a fighting machine. Together they are the crime fighting team of Big Daddy (a barely disguised alteration on Batman) and Hit-Girl, with far more talent at killing bad guys than Kick-Ass could ever hope for.

Big Daddy and Hit-Girl are on a mission to take down a crime boss (Mark Strong), whose son (Christopher Mintz-Plasse) coincidentally acts as a side-kick to Kick-Ass before pressure from his criminal father leads him to switch sides. This inevitably results in a superhero brawl in which the primary participants (aside from inconsequential henchmen) are under-age, to the annoyance of many conservative filmgoers upon the initial release. Still containing more than a few shocking moments (even by today’s standards), Kick-Ass may not be a modern classic but certainly doesn’t make for a boring view.

The high level of spectacle and detailed production values alone make Kick-Ass a prime choice for 4K Ultra HD release, and it doesn’t disappoint. There are a few sequences in particular where the high dynamic range provided an enhanced presentation, especially with the bright colors used for several of the superhero (and villain) costumes. The soundtrack even feels crisper, providing an immersive experience when paired with a decent sound system. The special features are exactly the same as they were on the Blu-ray release, which makes sense considering one of those Blu-ray discs are included, along with a Digital HD copy of the film. Unlike some 4K releases, a majority of the special features from the Blu-ray are also included on the Ultra HD disc.