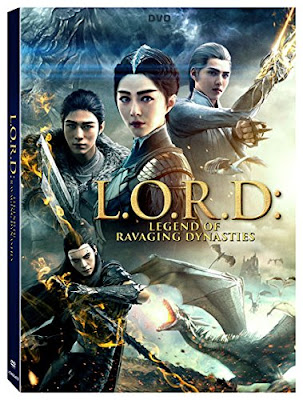 There is not nearly enough backstory given to the audience before throwing them into the center of this fantasy universe, in which fighters known as soul masters are equipped with soul beasts. Lowly bus boy Qi Ling (voiced by Cheney Chen) unwittingly tames a legendary soul beast known as Ice Fang, so Yin Chen (Kris Wu) shows up to take him on as a disciple. This is a familiar formula, filled with training sequences as Qi Ling discovers his abilities and how to use them. But the film does not stop there, adding in countless other characters in a complicated battle between seven lords over four territories, never making it entirely clear why they are fighting with each other in the first place.

When we are allowed to simply follow Qi Ling on his path to become one of the soul masters, the film is easy enough to follow. Unfortunately, the narrative is over-stuffed with characters, many of which are only truly distinguishable by their soul beasts, which come in the form of various animals. By the end, however, they all seemed to be fighting each other with little explanation why, not to mention why we should care. The primary focus seemed to be the visual spectacle rather than the story or characters.

As far as motion capture CGI movies go, L.O.R.D. is rather generic. The animation is not awful, but it is also hardly cutting edge. The action is where all of the effort went, and there are a few sequences that are full of spectacle, but it never saves the scenes of dialogue from looking like a bad video game. The soul beasts look decent enough, but the dubbing rarely matches up with the lips of characters when they speak and their eyes look completely soulless. This is the type of animation that likely would have impressed a decade ago, but now it feels somewhat sub par.

The DVD comes with no special features. There is truly no reason to purchase or rent this film unless you are a dedicated fan of animated Chinese fantasy or because of pre-existing knowledge of the books.