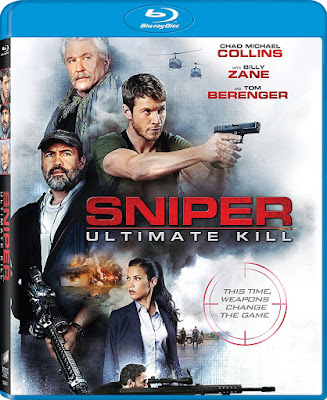 Chad Michael Collins returns to the role of Brandon Beckett, son of famed sniper Thomas Beckett (Berenger), who returns as a consultant in this film when a Colombian drug kingpin named Jesús Morales (Juan Sebastián Calero) hires a sniper to take out his competition. This also makes the task of extraditing Morales to the United States for his crimes more difficult than the DEA imagined. The sniper known as “The Devil” is equipped with special bullets able to lock onto targets and readjust to track them, which Beckett discovers for himself when an operation is thwarted by his attacks.

As often happens in these films, Beckett suspects that there is a mole feeding information to the enemy. After being taken off-guard by the enemy sniper, who has better equipment and always seems one step ahead, Beckett and DEA agent Kate Estrada (Danay Garcia) go rogue in order to take down the sniper and capture Morales. This results in multiple deaths by high powered rifles, providing some of the franchise’s more gruesome kill shots. As far as action is concerned, this is one of the more tightly constructed entries into the franchise, even if the storyline feels vaguely derivative of multiple past installments. If it is sniper action you are looking for, there are worse films to watch.

The Blu-ray offers no special features. The only highlight of the high definition presentation is the visuals from the CGI headshots and the 5.1 DTS HD surround sound, which occasionally enhances the feeling of sniper fire. Other than the sniper action, which is interspersed carefully throughout the 93-minute run-time, the only enjoyment found in the film comes from cheap comedic relief provided by Zane and an assortment of scenes with nude women, presumably thrown in to indulge the machismo of the target audience.