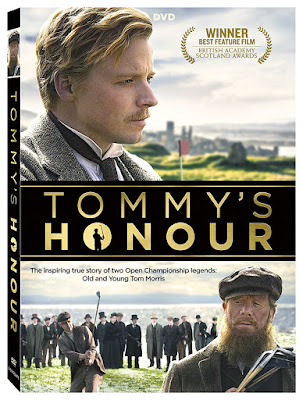 The film traces the legacy of the man often called the grandfather of golf, because of his ability to play as well as the many courses that he designed. This man was Tom Morris (Peter Mullen), but Tommy’s Honour is actually more about his son, Tommy Morris (Jack Lowden). Although his father was a legendary player, Tommy surpassed him at a record-breaking young age. The focus of the film may be on Tommy, as hinted by the title and how much of the screen time is spent with him, but the heart of Tommy’s Honour lies in the relationship between father and son. They are both legendary golfers, but have a tumultuous relationship that can often be as combative as supportive. They often play as doubles, until Tommy’s skills surpass his fathers, opening his life up to all sorts of opportunities never given to his father. From there, the relationship between the two becomes complicated by additional matters, all distracting the film from the game of golf entirely.

Had the film decided to just focus on the relationship between Tommy and his father, Tommy’s Honour might have been a bit more evenly paced. Instead, there are large sections of the narrative that exclude Tom entirely, focusing instead on Tommy’s romantic love interest. And this relationship takes the narrative on another unnecessary detour, because Tommy’s woman of choice is Meg Drinnen (Ophelia Lovibond), a woman shamed from a past pregnancy out of wedlock. As romantic as this narrative can be, it often feels like a separate film from the one about golf.

When the film becomes distracted by the gossip and respectability of Meg, the narrative feels better suited for a TV show or miniseries, which would allow the story to meander with more freedom. And this is not the only distraction about the social constructs of the time, as Tommy is often seen to be reaching out to be a part of the upper class with his winnings. Once again, this only takes us further away from a film about the beginnings of a sport, and more into ideas about the birth of the idea of celebrity. It isn’t just that there are so many splintered storylines, it is that they rarely seem to be working together to tell a story.

Even with all of these various themes and subplots fighting against each other for screen time, Tommy’s Honour still could have been an exciting film. With this much character development, the filming of the golf sequences could have had much more impact, but they are rarely filmed in such a way that embraces the spectacle or suspense of the game. Far too often we are stuck watching characters swing without even seeing where the balls land. All there is to judge the quality of their shot is the reaction from the crowds watching, and this just feels like a cruelly dull way to film a sports movie. Even when we do see shots taken, it is usually a put, and even those are often unimaginatively filmed.

The DVD only has one special feature, but it is a fairly in-depth making of featurette with an appearance by golfer Jordan Spieth.