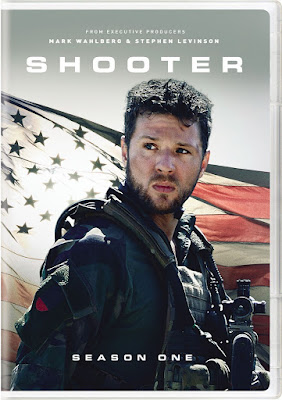 Ryan Phillippe takes over for Mark Wahlberg (who serves as executive producer) in the role of Bob Lee Swagger (sadly, the awful name has not changed since the film), a highly decorated sniper who is living peacefully in retirement with his wife (Shantel VanSanten) and daughter when a former commanding officer asks him for a favor. Isaac Johnson (Omar Epps) tells Swagger about rumors of a plot to assassinate the president, and employs the sniper’s expertise on where that attack is most likely to come from. After a sniper still manages to get a shot off, suddenly all of the evidence points to Swagger as the shooter, and he must escape authorities in order to clear his own name.

The show follows the familiar structure of a narrative about a man being framed, and Swagger spends much of the remainder of the season investigating the crime in clandestine, trying to clear his own name. Thankfully, not everyone is as quick to believe the story that Swagger is an unstable veteran. Carrying over half of the terrible name and changing the gender from the original film, FBI agent Nadine Memphis (Cynthia Addai-Robinson) becomes an ally for Swagger when she realizes that the evidence points to a different shooter. Together these two work to get to the bottom of the mystery, and then spend the final episodes taking out the real bad guys, who include a notorious sniper and Swagger’s battlefield nemesis, Solotov (Josh Stewart).

There are only ten episodes in the first season of “Shooter” which keeps the familiar narrative from being dragged out too long without resolution. Some of the episodes still tend to drag, even if they find a way to cram in a bit of creative shooting into most. The violence remains mostly bloodless, though it somehow manages to be fairly violent for a TV show. It is toned down from the film, but should still satisfy the cravings of action fans. Still, this is a show that works better when it is being smart, rather than graphic. Hopefully this can continue into a second season.

All ten episodes are included on two discs in this set. There is also a brief making-of featurette, though it is promotional more than anything. None of the difficulties from the show’s production are discussed, from the delayed premiere to an injured stuntman on set. As most special features are doing nowadays, the featurette is another excuse to promote and praise the franchise rather than give any real information.