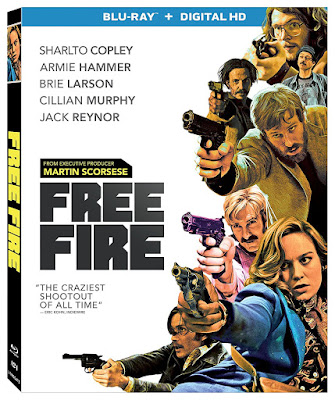 The simplicity of the plot reminded me of Reservoir Dogs, with more guns, period costumes, and consecutive editing of the action. The film starts out with the promise of a simple arms deal, which we know will be anything but simple. Set in 1978 Boston, Justine (Brie Larson) sets up a weapons sale between an IRA arms deal named Chris (Cillian Murphy) and a sleazy South African gunrunner named Vernon (Sharlto Copley), each joined by their entourage of men. Along with the mediation of Justine, an arms rep named Ord (Armie Hammer) is there to make sure everything goes as planned, but it all quickly goes to hell when it turns out two henchmen on opposing sides had an altercation the previous evening.

A few gunshots escalate into an all out battle, which is at both times hilarious and realistically violent. The simplicity of the plot allows filmmaker Ben Wheatley to focus on the execution, primarily in the staging of the single-location 90-minute firefight. Each camera angle and staging of the actors is impeccably thought out, edited together with impressive seamlessness. Even during the times you may find yourself longing for more story, Free Fire never fails to entertain. Limited as the film’s goals may seem, it achieves them all with perfection. And in those brief moments when someone isn’t getting shot, the ensemble cast of criminals miscreants remain endlessly amusing. It’s a cast full of character actors, all fully committed to the quirks of the role they play.
The Blu-ray release for Free Fire comes with a Digital HD copy of the film. The special features on the disc only include two extras, but they are both excellent. The making-of featurette mostly features the cast talking about Wheatley’s approach as he works somewhere in the background, while the commentary track gives us the entire running-time to hear the filmmaker’s thoughts and process.