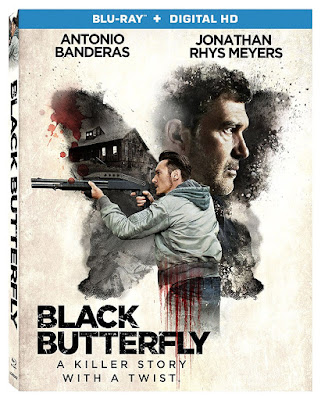 As far too many thrillers seem to, the protagonist of Black Butterfly is a writer, unable to complete his latest novel. The writer who can’t write a good story until they live out a real-life story that they can exploit for material is so fucking tired that I feel exhausted just writing it out. Half of Stephen King’s body of work seems to utilize this character (and often the plot device as well). But I will move on, even those this trope returns in full force throughout the film. Paul (Antonio Banderas) is having such a hard time succeeding as a writer that he is in the process of selling his secluded cabin in Colorado, though his real estate agent (Piper Perabo) is having an equally difficult time finding anyone interested in the remote pigsty.

Paul seems to conveniently stumble upon a solution to all of his problems when he picks up a drifter hitchhiking along the road to his cabin. Jack (Jonathan Rhys Meyers) has an air of danger, which is meant to be suspicious after we watch an opening scene of a woman being abducted and conveniently hear local news of a serial killer loose in the area. But despite Jack’s violent persona, he immediately begins fixing up Paul’s home, making it more presentable for sale. At the same time, he encourages the writer to do less drinking and more work, even planting the seed of an idea to write a book about his own mysterious arrival.

There is a middle section of the film which begins to bear an uncanny resemblance to Misery, making the author-as-protagonist trope even more telling. From there, the movie delves into a number of useless plot twists, essentially throwing a middle finger at the audience with the final one. Even if there are moments of sincere suspense within this film, it is designed to make you feel cheated by the end. The only thing making the viewing worthwhile is the actual experience of the viewing, because the film does not stand up to further inspection. And within that viewing experience, it is only the dedicated performances of the three leads that even begin to make up for the contrived dialogue and manipulative twists.

The Blu-ray release for Black Butterfly is somewhat unnecessary. Although there is some beautiful scenery in the Colorado setting, much of the film is spent inside the dusky cabin. It is a film full of dialogue, with only a few brief action scenes that don’t offer many visual spectacles that high definition might enhance. The disc also comes with a code for the Digital HD copy of the movie, and a handful of extras on the disc. These special features include an audio commentary with Goodman, along with co-writer Marc Frydman. There is also a brief promotional making-of featurette.