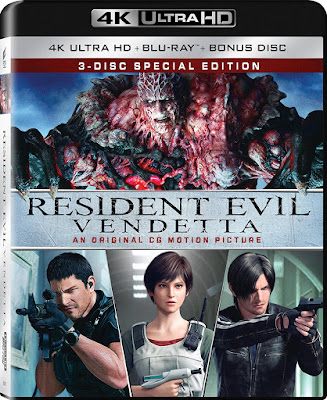 While the story does include a few reappearing characters from the franchise, it doesn’t have a narrative that connects to previous films in any significant way. Chris Redfield puts together a team to hunt down a global arms dealer with a weapon with a new zombie virus, ones which can be directed at specific targets. So, essentially the film is about putting a stop to the weaponization of zombies, rather than about the zombies themselves. Chris initially fails to stop the man behind the virus, Glenn Arias, but enlists the help of recruit Leon Kennedy and a scientist named Rebecca Chambers, to help track him down and stop him before he spreads the virus.

There are a lot of problems with the film from this point on, and the biggest is how much is spent talking rather than giving us the much desired zombie action. We get to know the characters through these seemingly endless jab-fests, most of all villain Glenn Arias. His tragic backstory is laughably melodramatic, giving him motivation to kidnap Rebecca for the mere fact that she resembles his deceased wife. Ironically enough, his plan is to kill her. If only this film had learned to utilize the asset of the visuals more, the bad melodrama and predictable storyline would have been easier to forgive.

The visuals are impressive, even if too much of the film is spent forcing us to watch CGI characters attempting to emote, the one thing that realistic animated films still struggle with. The characters tend to look dead in the eyes, and it is distracting when so much of the film is focused on just that. But when the movie does have an action sequence or other elements of visual spectacle, Vendetta is allowed to shine. Plenty of the action is immersive enough distract from the unfortunate story, but there simply isn’t enough of it.

The visuals are particularly impressive on 4K. If ever there is a way to truly appreciate the latest in visual technology, it is by watching an animated film. You will see things you never knew existed. The Blu-ray of Vendetta is impressive, while the 4K is on another level. The third disc in the special edition set is a bonus disc, including all of the special features which couldn’t be fit onto the Blu-ray. The 4K disc only has the film.

The special features on the Blu-ray include an audio commentary from filmmaker Takanori Tsujimoto, as well as a stills gallery and three featurettes. All three are about the special features, though two are about the designing of the visuals, and the third is a motion capture set tour with one of the performers, Dante Carver. The bonus special features disc has three featurettes, which make up just over twenty-minutes of material. The longest is Tokyo Game Show footage, with the creators addressing the crowd before showing the trailer. There are also two brief promotional featurettes, one about creating the world of Vendetta and the other is a BSAA mission briefing, essentially just laying out the narrative to track down Aries.