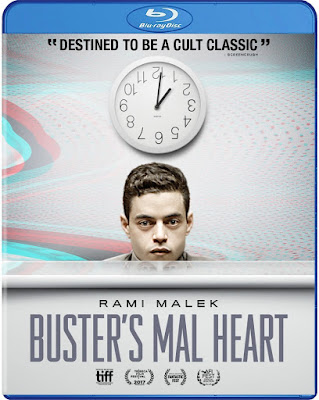 On the surface there seems no reason to compare this film to that highly successful cult film from 2001, because the plots seem completely different. The basic narrative of the film, told through nonlinear storytelling and including what might or might not be fantasy/dream sequences, involves a man slowly losing his mind while working nights as a hotel concierge. Buster (Rami Malek) is a family man trying to make ends meet in order to build a home for his wife (Kate Lyn Sheil) and their daughter, even though the exhaustion of his routine is taking a visible toll on him.

When Buster is visited at work by a man (DJ Qualls) who warns him of an impending event called The Inversion, we know that he will somehow grow to believe this wild conspiracy theory. The reason this is immediately clear is because the film regularly cuts forward to scenes in the future, with Buster running wild in the woods. Surviving by breaking into empty vacation homes when he isn’t sleeping in caves, Buster is a notorious figure in the mountains, donning a long beard and having a penchant for calling radio shows to rant about The Inversion. There is also a third storyline involving Buster being stranded on a boat for 40 days and 40 nights, the religious significance of which should not be lost.

While the nonlinear editing between the three sections of the film is certainly disorienting, the ideas behind the construct aren’t as fully formed as they should be. It often feels as though confusion is the intention of Buster’s Mal Heart, while the actual intention of the film’s message becomes secondary. With that being said, Malek has gained celebrity on the show “Mr. Robot” since shooting this film, and his fanbase may enjoy watching his deadpan performance in this darkly humorous indi science fiction film. It is an interesting film, but feels like one that would have benefited from a bit more clarity. Even though one can gather meaning from breadcrumbs left by the filmmaker, they don’t amount to anything satisfying enough to warrant the effort.

The special features on the Blu-ray do include some deleted scenes, though they won’t magically explain the film in any way audience members might hope. The only other extra are trailers. The film itself is visually interesting, though the high definition is not entirely necessary but certainly helpful in fully appreciating some of the magnificent location shooting, especially in the snowy mountains of the future timeline.