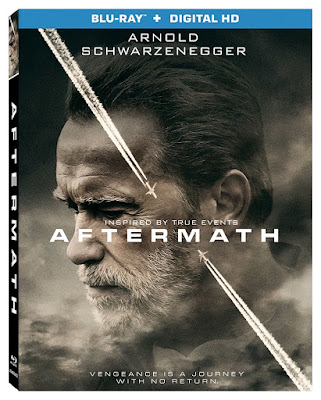 This is not to say that the acting is not better than a TV movie, but the cast often deserves better than the material. Arnold Schwarzenegger has been working especially hard recently to show that he is capable of more than just the action genre thrills that he became famous for. In a vanity-free performance (even giving us a nude shower scene to show the way his body has aged), Schwarzenegger plays a contractor named Roman who is awaiting the arrival of his wife and pregnant daughter one fateful Christmas, only to discover that their plane has suffered a tragic accident.

Aftermath may have been a different film had the entire run-time been devoted to Roman’s story, but we never truly penetrate his grief beyond the surface. And the only reason that the narrative is able to keep his thought process somewhat mysterious, making his final actions so much more shocking, is the parallel examination of guilt from the air traffic controller responsible for the accident. We aren’t even given all of the information about the mistake, never really knowing how much was preventable, but that does not stop the shame of the events from completely devastating the life of Jake (Scott McNairy).

There is an obvious tendency to focus on Schwarzenegger’s performance, if only because it is unexpected to see him in a heavy drama, but McNairy often steals the show as a man completely unhinged by the devastation he has caused. I felt for Roman, but the screenplay allows us into the life and grief of Jake on a much deeper level. Part of this is merely because Jake is given other actors to interact with, including his wife (Maggie Grace) and son (Judah Nelson), while Roman is allowed to suffer alone. In the end, I had to wonder what statement the filmmaker intended to make, beyond spreading the grief of the characters onto the viewers in an uncharitable manner.

The Blu-ray release for a film like Aftermath is entirely unnecessary. Though it is competently shot, this is a very low key drama without the type of visual excitement that high definition might enhance. The special features on the disc include an audio commentary with director Elliott Lester and producer Eric Watson, as well as interviews with Lester and cinematographer Peter Vermeer. A trailer gallery for additional Lionsgate films is also included, and the Blu-ray comes with a Digital HD copy of Aftermath.