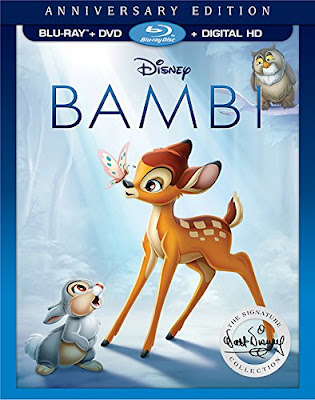 The only plot for this 1942 classic is the journey of a young deer as he grows up in the forest. There are no onscreen bad guys (other than the hunters, who are only seen briefly in the distance), few obstacles beyond the difficulties of growing up, and the animation and character design is clearly more important than anything in the film’s screenplay. The animation was so impressive that it became the most re-used in Disney history, with many of the shots and characters appearing in other Disney movies over the years. This is likely because of how much effort went into making the animals appear lifelike in their movement and design, rather than the cutesy cartoons of animation’s past. There was so much emphasis on the realism of these animal characters that the film even dispatched the typical tendency to have them sing, instead keeping all of the music in the background, sung by an unseen choir.

As realistic as the character animation is in Bambi, the backgrounds are wonderfully expressionistic, resembling watercolor paintings instead of sharp accuracy. This highlights the realism of the characters even further, while allowing the background to capture a mood. Walt Disney was so determined to have the animals portrayed realistically that Bambi was worked on for much longer than was typical, with several other Disney films being released before it, despite this being the first feature film to go into production following the success of Snow White and the Seven Dwarfs. All in all, eight years was spent perfecting the animation of Bambi.

Even though Bambi was an initial box office failure, there is no denying the historical significance of the film, which may be why Disney releases new versions so regularly. This Anniversary Edition Blu-ray release is being called The Signature Collection Edition, which is somehow different/better than the Diamond Edition released several years ago. Because the Diamond Edition is out of print and difficult to find (or expensive to buy), this latest release offers the film to new consumers wanting to build up their home entertainment Disney collection.

Along with providing consumers with a re-release of the classic film, there are new extras to be enjoyed. Many of the featurettes are not new, though they are still enjoyable and informative, but this package does include a digital copy of the film for the first time. Exclusive to the Blu-ray release is a new version of a classic Oswald the Lucky Rabbit short film. As well as including behind-the-scenes footage of the production and test animation, the extras also have deleted scenes from the film. There were many sequences that were started but abandoned, leaving fans plenty of additional Bambi animation to enjoy, even in its unfinished state. The Blu-ray release also comes with a DVD copy of the film and a collectible Lithograph insert featuring the art work of Tyrus Wong.