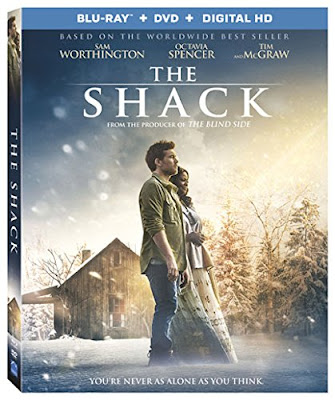 Falling into the trap of many faith-based narratives, The Shack is dripping with contrived despair and melodrama. Beginning with the background of our protagonist, Mack (Sam Worthington), whose childhood included addiction and abuse from his father figure and resulted in the child’s homicidal revenge, the film only piles on the misery as it continues. When a family camping trip results in a freak abduction of his youngest daughter, Mack is left with even more trauma to blame on God, who kindly sends him an invitation to the abandoned shack where it all originated.

Leaving behind his wife (Radha Mitchell) and two other children, Mack returns to the scene of the crime and discovers three strangers who introduce themselves as God. This trio represents the trinity, including Jesus (Avraham Aviv Alush), the Holy Spirit (Sumire Matsubara), and the one who calls herself Papa (Octavia Spencer). Over the course of a weekend, Mack comes to terms with his loss and the anger he feels, restoring his relationship with God along the way. It is all very peaceful and easy, feeling absolutely nothing like grief in the real world. In fact, although I appreciated aspects of the novel, the film has oversimplified the process to the point of being insulting. Even worse, the movie is dull.

I think part of the reason that the movie is as boring as it is has to do with the filmmaker’s emphasis on the lighter and more joyous aspects of the narrative. The effort is clearly made in order to attempt to show how positive religion can be, though it does so without ever giving us an accurate depiction of why faith is necessary. By refusing to dig into the misery beyond the surface events, the relief from God feels unearned. And although I appreciate some of the melodrama being understated, it never felt close to the emotional level necessary for the material. Perhaps some of this is simply the shortcomings of Worthington’s abilities as an actor. Or perhaps this was an effort to keep this film as family friendly as possible.

The biggest issue with this film, other than being completely unnecessary, is the blandness of it. First of all, 132-minutes is far too long for a film with so little happening. Secondly, for a movie about something so fantastical, it is remarkably uninspired visually. The opportunities to make this more engaging are wasted on bland nature scenes and unimpressive CGI. And lastly, most of this movie plays out like an extended therapy session. Even when the locations change, this is essentially just a movie with main character talking about feelings. The cheesy lines may have mostly been cut down compared to other faith-based films, but that doesn’t mean that the dialogue here is inspired in any way. At best, it is passable. Even though Spencer does an admirable job saying the words with sincerity, they are rarely words that feel as profound as we are meant to believe they are.

The Blu-ray release includes plenty of special features, even if most of them are self promotional. There is a featurette discussing the author’s journey writing the novel, a few evangelical making-of featurettes, deleted scenes, and a commentary track with director Stuart Hazeldine (Exam). There is even a featurette about a song from Hillside United which was created for this film, because apparently there is cross-promotional marketing within faith-based films now. It isn’t enough to buy into the adaptation of a best-selling book everyone with faith was pressured into buying into, but you also must have the heavily marketed worship band from a popular mega-church shoved down your throat in the soundtrack and special features. As long as Christians keep blindly buying into the consumerist-driven aspects of evangelism, there will continue to be people selling it under the guise of faith. If nothing, The Shack proves that religion is simply good business.