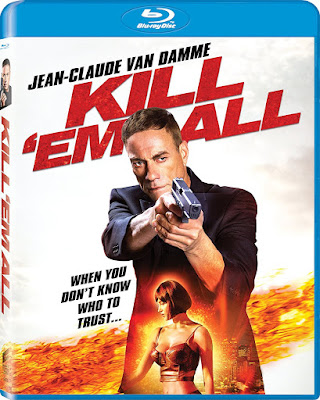 There seem to be two different types of straight-to-home-entertainment action releases of late: there are the ones that embrace the campy elements of the genre with simple rip-offs of previous successes, and there are the ones that overcomplicate the plot unnecessarily with too many characters and shifting alliances/double-crosses. Kill ‘Em All manages to be both, with a simple plot that could easily have been described as Die Hard in a hospital if it weren’t for the non-linear storytelling which makes a majority of the film flashback sequences from an unconvincing interrogation. Even though Jean-Claude Van Damme is clearly the focus of the film (as the cover of the Blu-ray allows all consumers to see), he is not the main character of the screenplay, which spends far more time with a witness being interrogated after a hospital shootout.

The entire film is Suzanne (Autumn Reeser) recounting her tale of working as a nurse when a stranger named Phillip (Van Damme) was brought into the hospital. Shortly after his arrival, a group of foreign thugs arrive to hunt him down, killing anyone who gets in their way. These flashback sequences are fairly straightforward, featuring a wounded Van Damme in situations that allow him to showcase his martial arts skills while also giving him an excuse in the plot, should his moves disappoint. Where the film really falls apart is in the investigation sequences. Because of how aggressive the line of questioning against Suzanne is, it is clear that she is not being treated as an ordinary witness. Although it may seem obvious that Suzanne is suspected of helping Phillip, it also seems possible that the agents questioning her may not be legitimate, if only because both the CIA agent (Peter Stormare) and FBI agent (Maria Conchita Alonso) are equipped with such thick accents that they are unbelievable in their roles as American agents. This could be a plot twist, or simply casting that was more concerned with recognizable actors than ones who fit the roles.

As bad as the interrogation segment of the film is (and as much time as it takes up), most people will only be seeing this film for the action sequences with Van Damme. The 80s action star proves he can still kick, but there isn’t much more in the film that impresses. As the directorial debut of longtime stuntman and Van Damme collaborator, Peter Malota, Kill ‘Em All makes full use of this connection without ever impressing with his previous skill set. The production is not just about professional alliances, however, with the casting of Van Damme’s son as a villain adding nepotism to the process as well. Even with all of the favors being done and the relationships on set, Kill ‘Em All still just feels like another generic low budget action film.