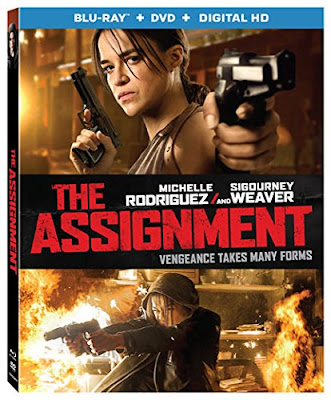 At the center of the film is a completely unbelievable performance from Michelle Rodriguez as a male hit man named Frank Kitchen. After being double-crossed, Frank awakes to discover that he has been given gender re-assignment surgery. Somehow nearly as unconvincing as a woman, the minor silver lining of the film is that this plot point at least allows Rodriguez to remove the awful facial hair and prosthetics, though she retains a silly forced deep voice and exaggerated male demeanor for the remainder of the film. The obvious direction of the plot is a revenge narrative, though one that is convoluted with all of the twists and turns expected from a film noir.

Knowing that this is intended to be a film noir, all of the surprises can be seen long before they arrive, including the addition of a duplicitous femme fatale character. Even more obnoxious is the decision to include several speed bumps into the narrative, in the form of an unnecessary romance, and by continually cutting to an interrogation of the doctor responsible for the transformation (played by Sigourney Weaver). This non-linear approach is fitting for a film noir, but does little for the pacing of the action and doesn’t add anything to the narrative.

The fact that it was directed by legendary filmmaker Walter Hill (48 Hrs., The Warriors) makes The Assignment an even bigger disappointment. None of the thrills from Hills earlier filmography are present in this tasteless crime film. The self serious tone of the film prevents even the exploitation elements from being enjoyable. There is plenty of nudity and some sex (though rarely in the same scenes), but none is titillating in the slightest. Rather than being a film that could be heralded by the LGTBQ community, it plays like a horror parable for alt-right straight men. And even that could have led to some engaging revenge film action, but The Assignment is violent without ever being enjoyable. Graphic gore replaces any interesting camera work or impressive choreography, making it a dark disappointment in every possible way.

The only special feature in this Blu-ray release is as big of a let-down as the film itself. Despite the fancy featurette titled “Filmmaking Portraits,” it is merely a 2-minute slideshow of photos from the production. The Blu-ray package also comes with DVD and Digital HD copies of the film.