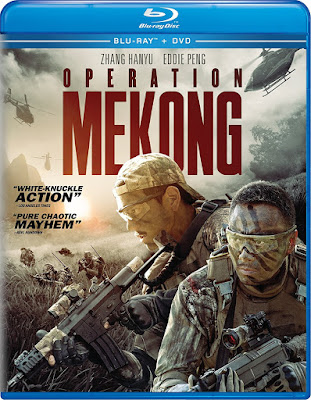 The international action film follows an elite group of Chinese narcotics officers sent to the Golden Triangle to investigate an incident known now as the Mekong Massacre. Two Chinese merchant ships were attacked on the Mekong River in the drug-manufacturing region, and their investigation uncovered that 900,000 methamphetamine pills along with the discovery that thirteen innocent sailors were executed. The Chinese team is led by Captain Gao Gang (Zhang Hanyu), who is joined by officers from Thailand, Laos, and Myanmar in a joint task force to take down the suspected cartel leader named Naw Khar, who even uses children to fight his battles. They also have the help of a local intelligence officer named Fang Xinwu (Eddie Pang), who joins them along the way with inside knowledge of the drug cartel.

What is impressive about Operation Mekong is how many different elements of action are fit into one film. There are undercover infiltrations, covert rescues, foot-chases, boat chases, firefights, hand-to-hand-combat, and even a dog that is so well trained that it is almost comical. Even if there are problems with the over-all film, individual set pieces are undeniably thrilling. The biggest thing preventing this movie from being great throughout is the struggle between the depiction of realism in the events and the urge to embrace the spectacle of the violence.

Although the film does refrain from being bogged down by politics, the effort to depict as many of the men in the operation as possible often makes it difficult to keep track of each significant character. Worse yet, it removes the impact of the lives lost within the action, as there are too many people involved to have the opportunity to care about them all individually. On the other hand, any more time spent developing these characters would have slowed down the pacing to the detriment of the final product. At 124 minutes, Operation Mekong is just long enough to allow us to know who the characters are, but not so long that the film drags between action sequences.

There is a balance between realism and spectacle in Operation Mekong, as if Lam were trying to have the best of both worlds. This often works, though moments of the film feel a bit ridiculous (such as a dog causing and then escaping a car crash) and moments that feel like a memorial to real-life victims crammed into a blockbuster action movie. The Blu-ray release comes with a making-of featurette and a trailer, though it is the high definition presentation and immersive audio which truly make this upgrade worthwhile, especially in the moments of the film that feel like all-out war. Surprisingly, the Blu-ray package also comes with a DVD copy of the film, which is a rarity among foreign releases.