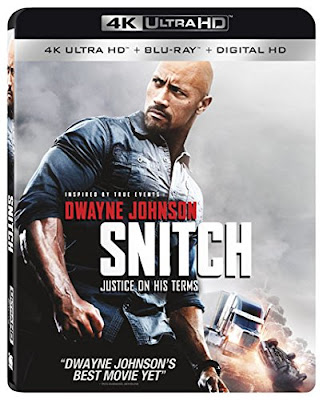 Based on true events (though no doubt exaggerated to be more cinematic), Snitch is about a construction company owner named John Matthews (Johnson) who uses his business to infiltrate the Mexican cartel as a way to help his son. After stupidly accepting a package of drugs from a friend setting him up, Jason (Rafi Gavron) finds himself with a harsh prison sentence that can only be minimized if he can snitch on another drug dealer. Unwilling to set up any of his friends, Jason must rely on his father’s dangerous plans to transport drugs using his company trucks.

Originally planning to just take down a local drug kingpin named Malik (Michael Kenneth Williams), John accidentally stumbles on an opportunity to infiltrate the Mexican drug cartel. With the DA (Susan Surandon) encouraging him to push forward while a seasoned DEA agent (Barry Pepper) warns him of the dangers, John is only really concerned with saving his son from a punishment that is harsh, if not undeserved. There are a lot of tense scenes with tough characters looking intimidating, but the only action occurs during the final run that is intended to take down the cartel by intercepting their money before it can be transported back to Mexico. For this reason, fans of Johnson’s body of work may be disappointed by how much of the film he spends looking scared of men half his size. In the real world, this is realistic, but in the cinematic universe it is strange not seeing Johnson act like he is invincible.
While Snitch certainly is well made, containing a number of talented actors in supporting roles, there is far less spectacle than one might expect from a film that has been given an upgrade to 4K. This is the type of film that actually benefits from some of the more realistic, less glossy aspects of filmmaking. This isn’t to say that the increase in color brightness and depth is not noticeable, but it simple feels unnecessary. Although they have not changed from the Blu-ray release (which is also included in this package), the special features have been included on the 4K disc. These include a making-of featurette, deleted scenes, and a commentary track with writer/director Ric Roman Waugh and editor Jonathan Chibnall. There is also a Digital HD copy included.