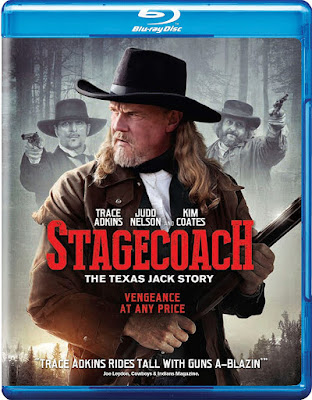 After beginning with the scene of a stagecoach robbery at the hands of outlaw, the film jumps forward in time to the bandit living a simple life as a ranch owner. Nathaniel Reed (Trace Adkins) has given up being a thief, though that doesn’t stop one of the victims of the aforementioned stagecoach robbery from hunting him down. U.S. Marshall Calhoun (Kim Coates) holds a grudge against the bandit that wounded him during the robbery, and he takes it out on Reed and his family once he finds them.

The effort to try and make the bandit look like the good guy is rather transparent, but this film just sleepwalks through each plot point. After being forced back into the life of an outlaw, Reed becomes the infamous Texas Jack. I have no idea where the name Jack comes from, but it is also entirely possible that I simply wasn’t paying attention when they explained. I had an extremely difficult time preventing my mind from wandering while watching this film, as it did very little to keep my attention. Even the casting of a bearded Judd Nelson was only momentarily diverting.

What ensues for the reminder of the film is a series of action scenes, though they are just as unimaginative as the dialogue. And even if the action were well choreographed and photographed, the characters are never developed enough by the screenplay to care what happens to them. In the end, I cared more about the film finishing than I did anything contained in the narrative.
The Blu-ray special features include a behind-the-scenes featurette that is just shy of 20-minutes long. There is also a trailer.