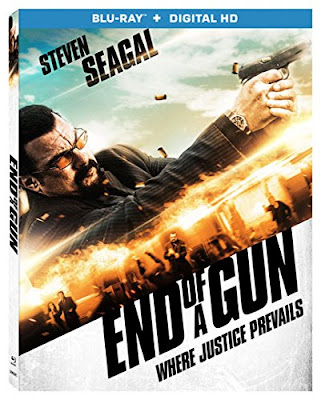 This time around Seagal mumbles through the film as Decker, which the plot synopsis describes as a mall security guard who used to be a DEA agent. I don’t recall any scenes of him as a security guard, but the entire endeavor was rather forgettable. If he is a security guard, it is hard to tell with the expensive suits that Seagal wears throughout the film. Honestly, it looks as though the former action star showed up on set and just started shooting without ever reading the script.

This former DEA agent is not a character that makes a lot of sense, because it only takes a chance encounter with an attractive woman for him to be pulled into criminal activity. In a scene that feels completely random and disconnected from the rest of the film, Decker intervenes with a man publicly abusing his girlfriend (Jade Ewen) and ends up killing him when the altercation escalates. The only thing more ridiculous than this scene is everything that follows. The woman approaches Decker after he has killed her boyfriend, offering to pay and have sex with him if he will break into police impound to retrieve stolen money from the trunk of her deceased ex’s car.

If you can get past the fact that Decker never acts like someone who worked in law enforcement, and ignore the police’s inability to check the trunk of the car, the logic of this film may not bother you. But that is no promise that the rest of the film will prove satisfactory in the slightest. If only the action were halfway competent, it would be far easier to dismiss plot holes and gaps in logic. What End of a Gun provides is the usual Seagal tripe, with the lazy actor refusing to exert any energy in the process of filmmaking. He mumbles all lines as though it is too much effort to enunciate, though I don’t entirely blame him considering the screenplay. Worst of all, he never even lifts his foot above his knees in the countless cheated kicks. The martial arts and fight choreography relies heavily on editing, so as to avoid exposing the fact that Seagal can’t be bothered to move at speeds that are even remotely believable.

Seagal will keep cashing checks and making these atrocities as long as anyone continues to watch them. Please, stop encouraging him.

It turns out they treat them like common thieves. When I politely informed them of the missing films (several of this past week’s other releases are suspiciously missing, including Southside With Me, “Harley and the Davidsons,” and Morgan), they asked me to send them a receipt of purchase, proving I had actually bought the films. What’s even more frustrating than the implication of this request is the fact that it does nothing to address the real problem. Code or no code, receipt or no receipt, it does nothing to change the fact that the films are not even entered into the Ultraviolet system to begin with. I don’t know if the studios using this system are aware of the problems, but consumers should know what they are paying for, and as of 12/16 it is not a digital copy.