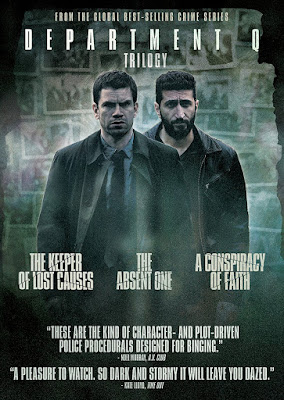 There is no shortage of detective narratives in film and television, so you may be wondering what makes these films so special. In a lot of ways they aren’t. The mysteries themselves are fairly traditional, and it isn’t difficult to imagine each of the films being adapted into fairly forgettable American films. But somehow these three Danish movies based on Jussi Adler-Olsen’s international bestselling novels are elevated by their direction and a collection of engaging performances. More than anything else, however, these films work because of the filmmakers’ faith in the characters over the action.

This is not to say that there isn’t any action, because each of the films has their moments of nail-biting suspense and the catharsis of climactic action-scene resolution. But these moments don’t do nearly as much to drive the narrative as the character development, a refreshing alternative to many other recent crime films. This is a series that understands that compelling characters need not be sacrificed in favor of spectacle, but instead helps to enhance its effects.

The first in the trilogy is The Keeper of Lost Causes (2013), which sets up the central relationship between new partners as well as establishing the style of the series. Carl Mørk (Nikolaj Lie Kaas) is a humorless detective, near impossible to work with despite his clear dedication to each case. When an investigation results in one of his partners being killed and the other paralyzed, Carl himself is psychologically wounded by the events. In an attempt to stick him with a desk job, Carl’s commander puts him in charge of a new department dedicated to resolving cold cases. He is joined by an assisting officer named Assad (Fares Fares), whose optimism and good nature counters that of Carl.

Though this pair is expected to close cases quickly and efficiently, Carl is not content to accept what he reads in the reports and begins an actual investigation into the disappearance of a woman from the past. When this case is dramatically resolved, Department Q is given more leeway in the way that they investigate the cold cases. They are also given new resources, which include the addition of an assistant named Rose (Johanne Louise Schmidt) for their second case in The Absent One (2014). Another optimistic personality is a welcome addition to contrast Carl’s somber dedication to the case, one which involves a series of mysterious crimes spanning a decade. It all starts with an unsolved murder mystery, but quickly turns into the darkest film in the series as it examines the blurred lines between victim and accomplice.

Without giving anything about the second film away, Carl is still suffering from the trauma of its events through much of A Conspiracy of Faith (2016), the latest in the film adaptations. While the first two cases were pursued due to Carl’s relentless obsession with them, it is Assad who takes an interest a child abduction case from the past, only able to capture Carl’s interest when they discover evidence that a new case is linked to the one from the past. While the urgency of two missing children forces Carl back into action, the pressure of having their lives depend on him may be more than he can handle. Continuing the trend of adding a new member of the team with each new case, Carl, Assad, and Rose are joined by a local police officer (Signe Anastassia Mannov), who is the first to investigate the evidence of a new child abduction case, despite no parents coming forward to admit their child has been taken.

Each of the three films is given individual discs for the release, including individual making-of featurettes, as well as a trailer for the trilogy. Although only the third film came out this year, this is the first time any of them have been available on DVD in the United States. It may seem impulsive to purchase an entire trilogy without having even seen the first film, but these films are endlessly engaging without sacrificing the intelligence of the material. I enjoyed these films so much that they had me scouring the internet for evidence of additional future installments.