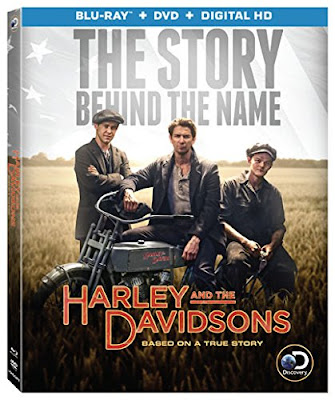 The limited series follows the history of the Harley Davison motorcycle, including its battles with main competitors and the difficulties of the development process. More than anything, though, this series is about the relationship of the men who launched the enterprise, and ultimately this is also why the series fails to stack up. If the focus is going to be on the relationship between the characters rather than the history, the acting and dialogue needs to be far more engaging than this collection of melodrama and clichés.

Even the description of this series sounds like an advertisement for Harley Davidson motorcycles, and that is how the content feels as well. The uglier events are tamed down and the achievements are heralded as far larger accomplishments than they actually were. In the end, this is just a bike, and perhaps not the revelatory subject that the series would have you believe over. And it certainly feels like 3 lengthy episodes are far more than this subject requires. Only Harley Davidson and motorcycle fanatics need pay attention, as this series offers little for the average viewer.

The four-disc set includes both Blu-ray and DVD copies of the three episodes, along with a few additional special features. The making-of featurette is promotional and brief, full of self flattery and little else. “Biketacular” is about as awful as the title suggests, providing a completely biased rundown of the best motorcycles ever made. Somehow this extra needed 40 minutes while the making-of feature was just about 6 minutes, showing that the main concern of this series is to appease bike fans above all else.

It turns out they treat them like common thieves. When I politely informed them of the missing films (several of this past week’s other releases are suspiciously missing, including Southside With Me, End of a Gun, and Morgan), they asked me to send them a receipt of purchase, proving I had actually bought the films. What’s even more frustrating than the implication of this request is the fact that it does nothing to address the real problem. Code or no code, receipt or no receipt, it does nothing to change the fact that the films are not even entered into the Ultraviolet system to begin with. I don’t know if the studios using this system are aware of the problems, but consumers should know what they are paying for, and as of 12/16 it is not a digital copy.