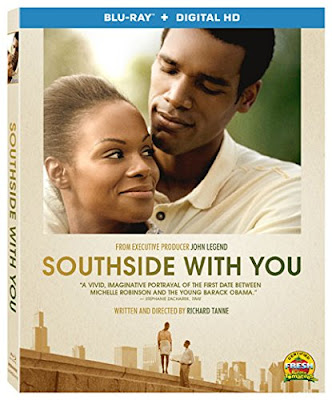 Southside with You also benefits from the audience’s prior knowledge about the characters, adding some layers of nuance to each thing they do or say. The film takes place on a summer day in 1989, but it never loses sight of where these characters will eventually end up. At times this feels a bit on-the-nose. According to director Richard Tanne, most of the events of the date actually occurred, but that doesn’t make their choice to see Spike Lee’s Do the Right Thing on their date feel any less contrived, especially when the pair runs into their white boss at the theater and have a discussion about the widely debated ending of the film.

In the summer of 1989 Barack Obama (Parker Sawyers) is working as a law associate between semesters of school, where he meets promising attorney Michelle Robinson (Tika Sumpter). We don’t get to see this meet cute, as the film begins with their first date rather than their first encounter. And there is a debate as to whether or not it is actually a date. While Barack makes to secret of his romantic intentions, Michelle insists that they are merely colleagues attending a town meeting together, and continues to resist his advances for a majority of the film.

Because Barack picks her up long before the meeting, these two have plenty of time to wander around Chicago’s South Side. They visit an art museum, get food together, and eventually end up at a movie, but this is all just background variation setting up the real star of the film, which is the screenplay. This could just as easily be put on as a stage play, because the interactions between the characters are far more significant than the setting or the actions they are carrying out during their discussions. Without the thoughtful screenwriting done by Tanne, balancing between the charm of the romantic story and the relevance of its discussion of race relations in America, Southside with Me may have been a bore.

Along with the excellent writing, Southside with Me works thanks to the careful casting. While Sawyers may do a slightly better job at embodying the iconic speech patterns and mannerisms of our current president (I’m clinging to that until the day he leaves office), Sumpter embraces the role as her own, even if there may have been other actresses that better resemble the First Lady. But more importantly, these two have chemistry together. Sometimes their passions conflict, leading to moments of disagreement that are necessary in a film where the ending is certain, but then there are the brief moments of romance planted as a foreshadow of the future to come. Southside with Me may not have much to say about the hope of American politics, and it has few answers about the future of race relations, but it does give this reviewer hope for the future of wholesome romance narratives in film.

Special features on the Blu-ray disc include a commentary track with director/writer Richard Tanne, along with original artwork and animations created in promotion of the film.

***  The Blu-ray release is supposed to come with a Digital HD copy, though it is currently not available through Ultraviolet, as advertised. This problem may be resolved soon, but as of 12/16, this is what I know: The Blu-ray includes the usual code for adding to your digital library, but the code doesn’t work since they have yet to add the film into their system. I contacted Ultraviolet to let them know that this title was not available and the code entered brings up an error as a result. I didn’t let Ultraviolet know that I am a critic who has been sent the release by the studio itself for review purposes, because I wanted to see how they would treat the average consumer.

It turns out they treat them like common thieves. When I politely informed them of the missing films (several of this past week’s other releases are suspiciously missing, including End of a Gun, “Harley and the Davidsons,” and Morgan), they asked me to send them a receipt of purchase, proving I had actually bought the films. What’s even more frustrating than the implication of this request is the fact that it does nothing to address the real problem. Code or no code, receipt or no receipt, it does nothing to change the fact that the films are not even entered into the Ultraviolet system to begin with. I don’t know if the studios using this system are aware of the problems, but consumers should know what they are paying for, and as of 12/16 it is not a digital copy.